There is no day so anticipated in the life of a young woman as the day of her wedding. All hopes and energies are focused on creating the perfect occasion—that flawless day to be cherished and remembered forever by the blissful couple. When you are in love, how could anything go wrong?

I don’t suppose, when one is contemplating the execution of a wedding, that one would consider the earliest opportunity for things going wrong to be the marriage record. After all, the couple said, “I do.” What more is necessary?

And yet, we sometimes hear stories of marriage licenses someone failed to return to the proper civil authorities, or some other paperwork nightmare.

In the grand scheme of things, I don’t suppose what happened in the case of Simon Snider and his bride-to-be, Nancy Jackson, is entirely earth-shattering. Perhaps the newlyweds never even realized what became of their marriage record.

For us, though—the genealogy hunters par excellence who document every step of the family history trail—a little stutter in the marriage record for Simon and Nancy Snider does not go unnoticed. 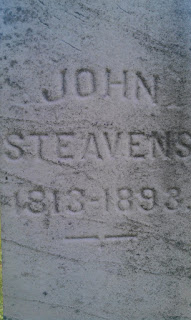 Though we pursue thorough documentation, we need to keep in mind that not everything is set in stone—not even gravestones, for instance. I’ve seen our ancestors’ names carved in stone—complete with misspellings. Take my husband’s great-great grandfather, John Stevens, buried under a proud monument bearing the legend, “John Steavens.” What do you do with a typo like that?!

The matter is no different for those records kept on mere paper. For some reason, back in those days, mistakes were sometimes not corrected. Maybe it’s because the error predated White-Out. Or erasers.

Or perhaps, back in 1841 when the Snider record came through the in-box at the county courthouse, the clerk was suffering from some post-luncheon malaise, wishing it were closer to five o’clock so he could beat the commute rush home.

For whatever reason, the surnames for both Simon and Nancy were correctly labeled in the margin of the thick binder where such marriage details were recorded. When it came to the body of the record itself, though, Nancy was instantly transformed from a Jackson to a Johnson.

Which will it be for us researchers one hundred seventy one years later? Nancy Jackson? Or Nancy Johnson? Both surnames are included in the entry. Upon which entry did the clerk suddenly get caught away in a daydream?

Not that transcriptions of original documents provide dependable assurance of correct data, but I did note that the record had it “right” in inserting Jackson in the Male Index to Marriages—Perry County (which you can see with your own eyes, if you care to scroll through the alphabetized entries here). However, I’d feel a bit more certain of this discovery if I could find another original source for confirmation.

Why would all this matter, you ask?

Simple: I have my eye on young Nancy Jackson. She, it turns out, carries a double bonus for this roots hunter.

Remember my family’s whirlwind trip to the genealogy section of the Allen County Public Library last summer? It was during that time, while I focused on my D.A.R. application via my maternal line, that my husband dove into researching his maternal connection to First Families of Ohio status.

Somewhere in the midst of that hasty library visit, my husband stumbled upon some interesting trivia about Simon Snider’s bride: she was the daughter of a military man—and possibly the granddaughter of a patriot serving in the American Revolutionary War.

While we are still in the process of checking the record for ourselves, what we’ve seen so far looks promising—until, of course, I run into enigmatic “documentation” such as this clerk’s slip of the pen.

I’m stymied. Does this mean I need a second verification of Nancy’s surname? Where will I happen upon such proof in the midst of this no-man’s-land of public records, predating the era in which such details were duly captured by governmental officials (at least those not sleeping on the job)?

Since stumbling upon the siren call of Nancy Jackson’s double significance as both First Families of Ohio and Daughters of the American Revolution candidate, no matter what I end up doing, it will surely include serious attention to further documentation. I’ve never been so fiercely concerned about the difference between a Jackson and a Johnson before.