Though the fabled advice, “Go west, young man,” may actually be an instance of a saying without a say-er, it does represent the general migration trend in the early years of our nation. However, not only does it post-date the action taken by one particular ancestor of our interest, it also stands in direct contrast to it.

For all that I do not yet know about Nancy Ann Jackson Snider’s own father—John Jay Jackson—I have been able to find some anecdotes recording a few of his life’s escapades. 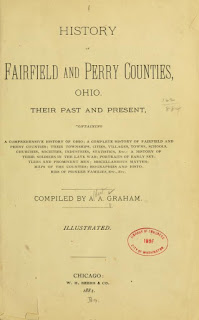 I suppose I can say I found some consolation in locating a brief biographical sketch of his life in the 1883 volume, History of Fairfield and Perry Counties, Ohio: Their Past and Present. That publication, crediting A. A. Graham as “compiler” is actually one book in two parts: that covering the Ohio county of Fairfield, and a second focusing on the county I’m researching—Perry County.

The brief mention of John Jackson in that book did not occur until after three hundred pages of text on the more notable institutions and individuals of both counties. It was included in a section labeled, “Miscellaneous.” Well, I guess I should be glad for catch-all categories. That surely beats being totally excluded, at least for this researcher.

There is a lot to be gleaned from that mere paragraph—or at least to be pondered. If nothing else, it provides me with my marching orders for a future research project.

John J. Jackson, of this township, and the latest surviving soldier of the War of 1812 in it, though a quiet, modest man all his life, has rather an eventful history. He served through the War of 1812, and drew a pension to the day of his death, for military services rendered the United States Government. After the war was over, he in some way drifted to St. Louis, and he emigrated from that place, or vicinity, to Bearfield township, Perry county, Ohio, and his name will be found in the history of that township as one of the first settlers. His first wife was an Ijams, a sister of William, John and Joseph Ijams, well remembered by the older citizens of Perry county. Mr. Jackson and others journeyed from St. Louis, across the country, to this county, in 1815 or 1816. It was a journey full of strange adventures. So far as now remembered, Mr. Jackson and companions are the only pioneers of Perry county who emigrated from the West. All the others came from the East or South, and nearly all from the East.

Such a dubious claim to fame: being the “only pioneers of Perry county who emigrated from the West.” It is certainly a curiosity—one for which, I guess, I can be glad, for it earned him a place in the historic record from which I can now begin my work.

Despite appearing to be a valid resource, though, it still leaves me with that squishy sense of needing to further verify some details. Some of those details don’t jive with reports I’ve read elsewhere. While it is wonderful having access to a history book drawn up just after the later years of John Jackson’s own life, even this contemporaneous record gives me pause to proceed with caution.

It is interesting to note that, while the preface and introduction hope to “be free from errors,” with a wry sense of the inevitable, I noticed that the volume is, ultimately, the product of a newspaperman—and you know how I feel about newspapers and getting things right. Such irony was not long in making itself apparent, with the Perry County portion of the book credited in the compiler’s preface to E. H. Colburn, and in the author’s preface signed as E. S. Colborn.

And we get snappish when genealogy researchers state their source documents incorrectly!
© Copyright 2011 – 2022 by Jacqi Stevens at 2:42:00 AM
Email ThisBlogThis!Share to TwitterShare to FacebookShare to Pinterest
Labels: Jackson, Military Service, On the Move, Perry County OH, Snider, Wars