Timed Too Late, But Still an Assignment

After all the disappointment of realizing that the land record registered in the Zanesville office of the Bureau of Land Management was not for our direct ancestor, it would, however, not be quite thorough of me to just close the books and walk away. I do have a tendency to linger over documents and follow my nose while wandering through the pages. The online resource for those General Land Office records certainly accommodates lookie-loos. And I certainly don’t mind looking around.

There was a record still to be found, after all. Dated before 1821 or not, I wanted to find the land record for our direct ancestor, Joseph S. Flowers. Since I’ve already found mention of his name—and his wife, Elizabeth, too—in baptismal records from 1823, I knew he had to be somewhere in the neighborhood.

And he was. Not in 1820, unfortunately, but by 1828, a land record did show up, after all. It was for the southwest quarter of section thirty of township sixteen, range fifteen in Perry County. Got that?

Unlike the record for his older brother, John Henry, this one mentioned the purchaser as “assignee of Vachel Ogg.” Of course, that brings up two questions:

What’s an assignee? And
Who on earth is Vachel Ogg?

Not a relative, as far as I know, would be the simple answer regarding Vachel Ogg. Whoever he was, his name actually showed up in two land patent documents—for nearby parcels, as it turns out. A few years prior to the transaction involving Joseph Flowers, Vachel Ogg and another man by the name of Jesse Huff had listed one Abraham Bennett as their assignee in the southwest quarter of section twenty. Yet in the preceding census, Vachel Ogg's residence in 1820 wasn’t even in Perry County. His household was included in the listing for Deerfield in Morgan County, Ohio. It is only when searching further for that name that a record for his 1814 marriage to Jane Riley reveals his connection to Muskingum County.

Whoever this Vachel Ogg was, by the mid 1820s, he had come into receipt of at least two parcels of land in the new Perry County for which he had no further use. For those who wish to know more than you’d ever hope to need about land patent and assignment in real estate law, there are several online resources more than happy to explain this, and specifically the significance of the term “assignee.” However, I feel safe to simplify and assume that “assignee” means that Vachel Ogg was merely passing along the land rights he had somehow previously acquired, himself. However he received those rights, by the way, I fail to determine—at least through the General Land Office records.

As far as our Joseph Flowers goes, though, by the time of his 1828 deposit of full payment required, he was now duly vested with all those rights of the assignee. Wherever home was before this point, it was now in Clayton Township of Perry County, Ohio. 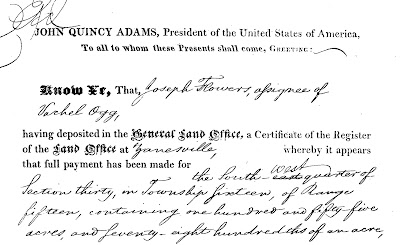