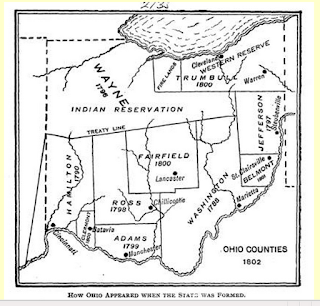 In trying to determine whether my husband’s direct line qualifies him as part of the Ohio Genealogical Society’s First Families of Ohio, let’s take a step back yet one more generation. Perhaps, in studying this earlier Flowers family, we can find some clues to help us determine whether it’s to be “Simon the Settler” or “Simon the Native Son.”

Taking a look at Simon Flowers’ parents will help provide the connection to their Pennsylvania origin. Maybe it will help us determine when the Flowers family left the old Pennsylvania homestead for good.

Simon’s father, unsurprisingly, was named Joseph—the very name which Simon gave his own firstborn son, perhaps in deference to Old World naming patterns. While I haven’t researched those naming patterns enough to convince myself that they are a deeply-ingrained facet of the culture, I have found a couple interesting articles on the subject. One—complete with Beer Barrel Polka accompaniment—examines the specific naming patterns for families of German background. Another old Rootsweb post examines the issue across cultures.

Since I’ve yet to discover when this Flowers family arrived from the Old World—and thus, where, specifically, they traveled from—I can’t say with certainty whether they claimed German heritage. Regardless, from what I’ve read, naming patterns seem to be widespread throughout a number of European cultures. While Simon’s 1817 arrival was very much in a New World setting, his colonial-born father Joseph most likely retained many of the Old World Customs. If so, it may provide me some hints as to the identities of those as-yet-unnamed ancestors from that shadowy generation lying just beyond my research reach.

Don’t let retention of any Old World customs fool you into thinking that this Joseph had stepped straight off the boat, himself. The senior Joseph Flowers was most likely born in the Berks County, Pennsylvania, region called Washington Township, just prior to the start of the American Revolution. There is enough documentation amidst the Perry County, Ohio, records to presume that the senior Joseph Flowers migrated from Pennsylvania to Ohio with at least two of his brothers and their families before 1821. And we will take a look at what we can find of this traveling extended family tomorrow.

Above right: "How Ohio Appeared When the State Was Formed," from J. F. Laning, "The Evolution of Ohio Counties," Ohio Archaeological and Historical Publications, 1896, volume 5, page 349; courtesy Wikipedia via the Ohio Historical Society; in the public domain.
© Copyright 2011 – 2022 by Jacqi Stevens at 2:49:00 AM
Email ThisBlogThis!Share to TwitterShare to FacebookShare to Pinterest
Labels: Flowers, Genealogical Organizations, Maps, On the Move, Perry County OH