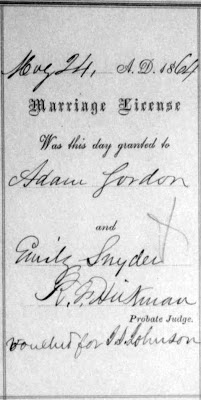 There are some times, when doing genealogical research, that you may use one resource to ascertain the date of an important event—say, a marriage—and then when you return to check things out later, you find that other documents act like they don’t know what you’re talking about.

While I’m reconstructing the long path that connects my husband and his family with their ancestors who arrived in Ohio before 1821, I can’t say that the itinerary has facilitated smooth sailing. We’ve already seen that in my quest to find the smoking gun for ancestor Simon Flowers. And when we switched gears to research Simon Snider’s family, we’ve already bumped up against sloppy record-keeping by the very government officials tasked with keeping the record straight.

Well, the way-back trip isn’t over yet.

Enter the one daughter of Simon and Nancy Johnson-er-Jackson Snider who connects us with the newer generation: Emily Catherine Snider. Since she was born prior to the advent of governmental birth records, there are no such records concurrently drawn up for her specific date of birth. We can generally estimate the year of her arrival from census records. If we want something more specific, we have to take her family’s word for it or rely on the good graces of the parish where she was raised. Or we can hope that the reporting party on her death certificate didn’t let the moment’s somber circumstances sway accurate recall of essential information.

If the record on Emily’s death certificate was correct, she was born in Perry County on October 22, 1843.

That may be the simple part of this genealogical reconstruction of Emily’s life. Well…along with the date of her death, which occurred well past the year in which the state of Ohio mandated governmental records. That date, we can be fairly certain, was August 11, 1915.

It is the squishy innards of the sandwich of her life that deserves questioning. Oh, not the part listing the names of her children—though I sometimes even struggle with that. It’s the circumstances of her marriage record that give me pause.

I’ve always assumed that Emily Catherine Snider married a man by the name of Adam Gordon, and that the date of the event was May 31, 1864. The wedding, I assumed, took place in their home town in Perry County. After all, that was what was reported in Male Index to Marriages—Perry County, Ohio. On a website where the book is scanned and freely accessible (well, all except for the frustration of having to scroll through the “G” section to the bottom of page 34), the very last entry states that Adam Gordon and Emily “Snyder” had their marriage record entered in book four on page 297.

It’s a good thing I had made note of that page number, for yesterday I attempted finding the scanned image of the actual marriage license. After all, the other day I had found the book containing Simon and Nancy Snider’s 1841 marriage record at FamilySearch. Why not check out the volume containing the more recent 1864 records?

Of course, the Perry County records don’t seem to be indexed on FamilySearch yet. That means searching by the hunt-and-peck method. You see now why I’m overjoyed that I knew the volume and page numbers.

Okay, so I’ll cut to the chase here. I do the back-and-forth samba to locate the right image number at FamilySearch, and pull up volume four, page number 297. And I find them at the top of the left-hand page.

Well, let me amend that statement: I find their names in the margin. As to the body of the record, may I put it mildly that I am stunned to find the entry blank?

What the record stated in the margin was:

May 24, A. D. 1864
Marriage License
Was this day granted to
Adam Gordon
And
Emily Snyder

The entry was then signed by someone who had indistinguishable handwriting, but who evidently was serving as a Probate Judge.

And here is what is interesting about this entry: under the judge’s signature, there is a handwritten addendum. It is merely the phrase, “vouched for.” Then there is another name, which looks vaguely like J. J. Johnson.

As for the rest of the form—you know, the usual stuff that starts out, “Personally came___applying for License for____to be married to____...”—well, that part was left clean. Not even an ink spot to fill in any of those blanks. Nada.

Needless to say, the “return” portion didn’t contain much more ink than that, either.

So, what did the mysterious Mr. Johnson vouch for? That Adam and Emily were married? I hope so. Emily Catherine Snider and Adam Gordon did, after all, live a long life together, have several children of their own, and produce one child who ultimately became my husband’s great-grandmother.

I know that, of course. But my word doesn’t serve as standard proof to satisfy boards inspecting documentation to verify lineage.

While the clock is ticking away, the calendar pages flying by on their approach to December 31, this is no time to stumble over another road block. It’s almost as if someone is saying, “You can’t get there from here.” Yet, maddeningly, I know I should be able to. This is not a remote, distant history I’m talking about here. It’s our family—but try telling someone else that! 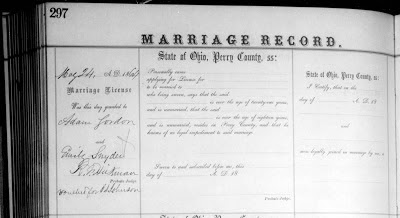