Looking Into Another Large Family

One thing that has struck me, as I work through the details of the descendancy from my target First Families of Ohio pioneer, is that with all these large families in the 1800s, it makes for a good number of potential candidates for the program. And yet, when I search through the Ohio Genealogical Society’s First Families roster, I find absolutely no trace of any of the surnames I’m pursuing. Is there no one from this Snider line who has already gone down this research path?

Now that I’ve traced Nicholas Schneider’s line down to his great granddaughter, Bertha Gordon Metzger, I see the line multiply once again. Between the Nicholas Schneider family of nine children, each one of those surviving to adulthood also added their progeny. Joseph and Bertha were no different regarding this Catholic heritage of large families.

Their early years together, though, did not come with a promising start. Shortly before their first anniversary, the young Metzger couple was expecting their first child. It was to be a girl. The baby arrived stillborn.

Joseph and Bertha thus claimed for their firstborn child a son, Lawrence Michael, who arrived in October, 1890. He it was who began a line of ten children—all of whom lived to adulthood, and all but two of whom married and had families of their own. Small wonder when I’d ask my mother-in-law if she knew such-and-so cousin that she would often give me a blank look. How could one keep up with so many cousins?!

To be fair, in making that statement, one must also consider the fact that the Metzger child that went on to be my husband’s grandmother was child number seven in this family constellation. Her arrival on the family scene didn’t occur until sixteen years after her parents’ wedding day. And she was an aunt to many, starting from the time she was only eleven.

Bertha Genevieve Metzger, though the fourth daughter, was the one bestowed with her mother’s given name—and possibly her aunt’s middle name, though the spelling wasn’t the same. Sandwiched between two immediately older brothers and followed in like manner, I wonder how she escaped growing up a tomboy.

There she was as a young girl, in a family portrait taken in front of their farm home, with the hugest bow resting jauntily atop her head—although admittedly, she didn’t look too happy about it. Perhaps her assigned seat, perched front and center between mom and dad, was a tactical move to insure subject compliance. Mom—Bertha Gordon Metzger—had baby Dorothy on her lap, while each parent had one of the two youngest boys—Joseph on the left, Robert on the right—flanking their outside arm.

The better-behaved older children comprised the second row in the portrait. Francis A. Metzger, by now ten years of age, started the line-up on the left. Next to him, his sister Mary—about to turn twenty—stood with her just-older sister Emma. The oldest son, Lawrence—by now twenty two and the tallest of the siblings by far—had yet to face service in the “Great War.” His much-younger sister Agnes stood at his other side, joined by yet another son, twelve year old George.

The scene was the old Metzger farm on Greenbranch Road near New Lexington. Frozen in place and time on a summer day in 1912 courtesy of an unnamed photographer, each one is now long gone, but for the memories. 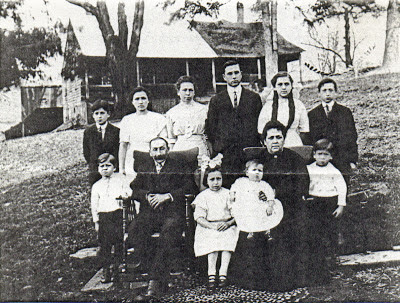