While genealogical pursuits take the researcher from the point of “Now” and work backwards to “Then,” in this grand tour of our First Families of Ohio candidate, I’m taking the opposite approach by following the timeline down to the present from way back when. Can that be called swimming against the tide? Is swimming upstream swimming against the flow of time—or against the tendency of genealogy research?

Never mind all this philosophical talk…let’s get down to examining the generation following Simon Snider and his wife Nancy Jackson Snider—no matter which direction it takes. 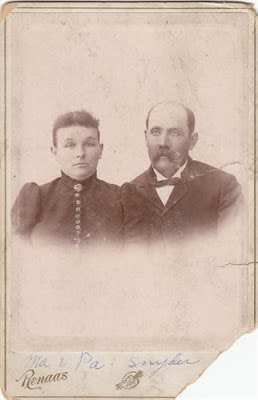 While we are still in the era of that governmental-records no-man’s-land, devoid of birth or death certificates to provide that handy who-what-where-when-how guide, at least from 1850 on, we can find census listings of the Sniders’ children’s names. Let’s take a tour of that now, since soon we will be moving to the next generation as we link First Families pioneer with current-day descendants.

With the advent of daughter number three in January 1845, I’m sure Simon was despairing of ever having any sons to carry the family name. He must have been relieved to welcome Joseph Edwin Snider on September 18, 1846—though that joy was to be short-lived, as the family lost their son four years later.

However, by that time, the Sniders had already been blessed with a second son, named after his paternal grandfather, arriving in 1848. Not to be outdone, the maternal grandfather was honored with a namesake shortly after New Year in 1850—the year of the first census to include this new family unit.

In the 1850 census, Simon and Nancy and the complete family of six children (Joseph had not yet died) show in the record for Reading Township in Perry County, Ohio.

But they are not finished yet.

By the 1860 census, this good Catholic family saw their ranks grow to include a total of ten children—and that was after the loss, that same year, of yet another son, Lyman Francis. Perhaps it is no surprise to notice the familiar name of J. J. Jackson—most likely Nancy Snider’s father—arriving at the household next door to the Sniders in time for this census. And—sign of things yet to come—the household on the other side of the Snider farm bearing the Overmyer name of a future son-in-law…and daughter-in-law.

Before the next census in 1870, the Snider family added yet another two daughters: Rosanna and Nancy Ann. However, that decade also saw the family lose their patriarch, as Simon passed away in 1867.

All told—at least according to widow Nancy’s report much later in the 1900 census—Simon and Nancy were the proud parents of fourteen children, eight of whom survived to report on that turn-of-the-century document.

The eleven children of the Snider household who survived to adulthood, with the exception of one, went on to marry and have large families of their own. At least four of them emigrated from Ohio to Iowa, and one moved in the opposite direction, settling in West Virginia.

One small token of appreciation for the legacy left by Simon and Nancy Snider may very well be that of the well-kept grave stone that serves to mark their memory. It stands in the Holy Trinity Cemetery in Somerset, Ohio, not far from the farm that was the lifelong family home.