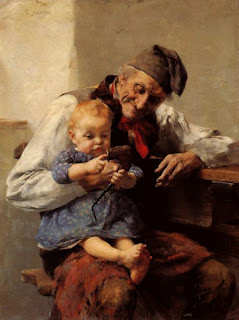 A one-line entry in a document handwritten by someone named William Mitchel on November 15, 1820, shows the itemization of the household count for one “Henery Flowers.” Long, but one line.

The Flowers household was situated in Madison Township in the then-newly-formed Perry County, centrally located in the state of Ohio.

While my hopes were up, fervently wishing that “Henery” was the Henry Flowers of our direct family line, I had to sit down and do a calculated tally of my own to see if it were really so. After all, it wasn’t just out of idle curiosity that I was doing all this math for a family of eleven. I was hoping that this discovery would lead to inclusion in the next set of designees for the Ohio Genealogical Society’s program known as First Families of Ohio. With a program deadline of arrival in Ohio by December 31 of 1820, this November 15 census record would sure be cutting it close.

The 1820 census, unlike those most researchers are familiar with from the 1900s, only listed the head of the household by name. Indeed, this was the custom for all census records until 1850.

The tally for this particular household ran like this:

I pulled up my database entry for the Flowers families from that time period, and scoped out which families would have a head of household aged 45 or older. Right from the start, it was clear it wouldn’t be the senior Henry Flowers, who by this time would have been decades older than forty five. With so many small children in the household, it was also unlikely that the senior Henry Flowers would be there as the resident grandfather, with only one male showing aged above forty five.

While the ages didn’t align perfectly, there was a match close enough to indicate that this was the family of John Henry Flowers, not his father, Henry Flowers—showing that, as was predicted in the naming patterns explanation from yesterday, the first name “John” had been dropped from the son’s name for everyday usage.

Here’s how the family lines up for this 1820 census, given my tentative dates of birth:

John Henry, born in 1771, would by now be 49 years of age. His wife, Susannah, would be 40. While their oldest son, Matthias, should have shown as seventeen years of age, perhaps the memories of war the family left behind in Pennsylvania induced them to under-represent his age—or perhaps it was just the matter of a late-in-the-year birthday, combined with the parental tendency of unbelief that one’s son could actually be that old.

The next two sons—Peter, aged 15, and Isaac, aged 12, may have been accounted for in the next age bracket in the census. Or, younger son Isaac may have been included in the slot for the four youngest boys indicated—along with sons Joseph (9), Jacob (7), and George (1). That age shift would allow for all six of the boys to be accounted for.

John Henry’s wife, Susannah, of course would be the eldest female represented on the census. Their three daughters under the age of ten would include Elizabeth, Susannah, and Barbara. However, even though census records spanning several decades consistently showed Elizabeth as having been born in 1811, it conflicts with the birth year for her brother Joseph and the calculation of age from her death record, which represented her as having been born in Ohio in 1809. At this point, I hardly care to quibble over a two year wobble on year of birth, when either date would handily qualify any descendant of John Henry and Susannah Ambrose Flowers as members of the First Families of Ohio program.

Don’t take that as “sour grapes” on my part, though. Even though it is obvious that this pre-deadline document does not give me the coveted prize, there is another Henry Flowers record—this time from 1813—that we’ll look at tomorrow. Maybe this time….

Above left: Georgios Jakobides, The Favorite; courtesy Wikipedia; in the public domain in the United States and in those countries with a copyright term of life of the artist plus seventy years.
© Copyright 2011 – 2022 by Jacqi Stevens at 2:47:00 AM
Email ThisBlogThis!Share to TwitterShare to FacebookShare to Pinterest
Labels: Ambrose, Flowers, Lineage Societies, Perry County OH