Henry and His Three Sons 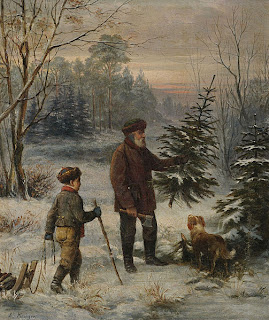 Looks like it’s time to roll out the Beer Barrel Polka again: we need to revisit the topic of German naming patterns. The reason? Determining the identity of Henry Flowers.

In pushing back the timeline of Flowers family history, we’ve so far traced the generations of my mother-in-law’s father through four generations. Starting with her father, John Ambrose Flowers, we mentioned his father Joseph E. Flowers. In turn, Joseph’s father was named Simon, and his father was a Joseph.

This elder Joseph had two brothers who, along with Joseph or possibly even before him, emigrated from their home in Pennsylvania to new territory in what had become the state of Ohio. One brother, younger than Joseph, was named Thomas Christopher Flowers. The other brother—perhaps the oldest of the children in the Flowers family—was named John Henry.

It is on account of John Henry that we need to revisit this issue of the naming patterns. For, you see, the father of those three brothers was named Henry Flowers.

In my search, I’ve run across two Ohio documents naming a Henry Flowers—both documents predating the First Families of Ohio deadline of December 31, 1820. If the Henry Flowers in question happens to be the father, my quest is over and I can merrily submit my paperwork to the Ohio Genealogical Society. However, if the listings for Henry Flowers happen to refer to the son, my work is far from being finished.

I had long known that some ethnic European traditions included naming children with a first name that was seldom used, followed by a middle name which served as a working name. My own family still carries down rudiments of this tradition—which, believe me, does not easily fit in the mold of a first-name-last-name-regimented world.

The reason for this naming tradition is handily explained in the Beer Barrel Polka site. As the website's author Charles F. Kerchner, Junior, puts it:

This pattern, by the way, holds true not only for German families, but is seen across several other European cultures. One first name often seen recurring will be the equivalent of our English “John.” The name serves to honor Saint John, following an old Catholic tradition. As Mr. Kerchner goes on to explain, once bestowed with this honorary designation, its use in everyday life is discontinued and the child is henceforth called by his middle name. The child once baptised as "John Henry" now is called, simply, "Henry."

While in our case, we will have no problem delineating the difference between the senior Henry Flowers and his second-born and third-born sons, when it comes to the son named John Henry, we need to proceed with caution.

And that is what is called for when we proceed, tomorrow, to examine the documents found from both 1813 and 1820, using the name “Henry Flowers.”

Father? Or son? It’s in determining the answer to this question that I’ll soon know whether my search is over.


Above left: Franz Krüger, "Vorweihnacht" (Before Christmas); oil on canvas; courtesy Wikipedia; in the public domain.

Lower right: detail from the 1820 Federal Census for Madison Township, Perry County, in the state of Ohio, naming the household of one "Henery Flowers."
© Copyright 2011 – 2022 by Jacqi Stevens at 2:49:00 AM
Email ThisBlogThis!Share to TwitterShare to FacebookShare to Pinterest
Labels: Flowers, Genealogical Organizations, Lineage Societies, Perry County OH