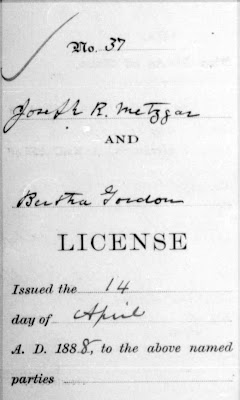 Weddings have a way of interjecting tension into the genealogical record. By saying that, believe me that I have no intention of wandering into a discourse on marital discord. I simply state that to reflect on the many opportunities inherent in this event to introduce yet more errors in the paper trail.

I mentioned yesterday that, of all the children of Adam and Emily Snider Gordon, the one we choose to focus on for the next generation of documentation is their daughter Bertha. Bertha it is who becomes my husband’s great grandmother. The goal is in sight, the accessibility of records now vastly increased as we inch closer to the 1900s.

Let me tell you, though: don’t breathe easy yet. There is more than one way to leave a genealogist stymied.

You’d think with a name like Snider, Bertha’s mother Emily would have been the one causing hair-pulling tantrums. However, her Snider-Snyder antics seem benign compared to the challenge of guessing phonetic misrepresentations of Bertha’s husband-to-be.

Bertha’s intended popped the question when she was young. Like many girls in that era, she was married while still a teenager—though in her case, the wedding took place just before she turned twenty. Like Bertha, her fiancé was a Perry County native, and while his parents were also married in Perry County, I can’t say that they had arrived there from their native Switzerland in time to put them in the running as First Families of Ohio material.

Perhaps it was Bertha’s future in-laws’ foreign accent that instigated that documentation grief. For their own marriage record, their surname is entered in the Male Index to Marriages—Perry County as Metzgar. (This resource is freely accessible online here, though once again, remember that it takes that tap dance of scrolling through the pages to get to page 55, where the 1849 entry for Michael "Metzgar" shows his marriage to Catharine Muter.)

By the time of the 1880 census, the family’s surname has morphed to Metzker, an obvious spelling approximation, once you think of it—though hardly a likely guess for those not initiated into the cult of phonetic creativity.

Yet on Bertha’s special day—April 17, 1888, the day of her wedding—the Index entry reverts to the Metzgar spelling.

Perhaps the census taker and the courthouse clerk never compared notes on this.

It will come as no surprise when, long after the wedding, the 1900 census record for Bertha’s young family reflects yet again the census taker’s preference in spelling styles—adding one variation: the “z” has been traded in for an “s” and the family is transformed from Metzker to Metsker.

Yet, for all those spelling liberties over the years—or turf wars between census officials and court clerks—I find it amusing to note that, in the end, the spelling variant that won the day was Metzger.

Not Metzker or even Metsker.