Genealogy:
Going to the Dogs


I'll never forget, after my return home from a genealogical research trip to Ireland a couple years ago, my amazed reaction to a post by a fellow blogger on the research difficulties she faced in locating any records in Ireland on her dad's paternal grandfather.

I already understood, of course, the particular challenges faced by those trying to document their family history in nineteenth-century Ireland; there simply aren't any records available for many of the items we've come to see, in America, as go-to sources for genealogical evidence. But I couldn't fathom the desperation—and, admittedly, the ingenuity—of seeking any sign of one's ancestors in dog license registers!

Now, in trying to trace any path toward resources to provide the identities of the people in this mystery photo album I found, discovering that the family owned a prize-winning—and surely registered—purebred dog made me wish that, like my Irish blogging friend Dara, I could pull up the register for the dog known as Bride Park Periwinkle.

Despite no longer being anywhere near the Emerald Isle, I did try my hand at some online searching. Rather than heading to my usual go-to search resource, I zeroed in on Google.ie. After all, if this kennel was located in Ireland, I needed to use the Irish version of that ubiquitous search engine.

I now saw why searching for any clues from the American Kennel Club wouldn't work. I needed to turn my attention to any leads at the Irish Kennel Club. That, I presumed—based on other place names found in the photo album I was researching—would be the likely organization at whose shows Bride Park Periwinkle had managed to obtain so many accolades.

Pending any search through the IKC archives, I spotted another couple interesting details that might help resolve my research dilemma. One, it turned out, was contained in the very photograph we had taken a look at yesterday. Admittedly, the digitized copy makes it difficult to see this, but the woman standing with the little white dog in those photographs is wearing an outfit that looks just like one we've already observed. 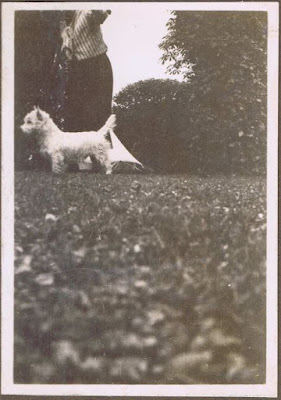 is the same as the one worn by the woman here? 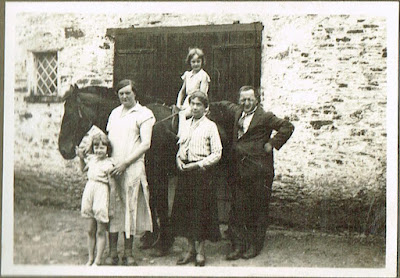 If so, the owner of Bride Park Periwinkle was likely the mother of either Harry or "self"—the woman whose name I believe to be Alice.

The second detail I found came courtesy of that Ireland-specific Google.ie search engine. The results led me to a newspaper archiving website called Irish Newspapers. Since it is a subscription site—and, alas, I am not a subscriber to this site I'd never heard of—all I could glean was a small icon of the newspaper edition of interest and a near-impossible-to-read version of their OCR readout. (Though I am not a subscriber, if you are, you may view the article via this link; apparently, the site is no longer providing subscriptions and content is, or will soon be, managed by another site, Irish Newspaper Archives.)

The article that interested me contained a small insertion in the May 18, 1937, edition of the Dublin Irish Independent. Under the headline, "Winners at the Cork Show," there were long lists of categories and names. For the breed West Highland White Terriers, there were two mentions that might pay off some handsome research dividends as we try to convert dog genealogy into the human kind.

"Mrs. Hawkes' Periwinkle of the Bride" followed another mention of a "Mrs. P. Hawkes" from Ovens. Ovens—for those of us unfamiliar with the geography of County Cork—is on the main road leading from the city of Cork through Macroom to Killarney. It is not far from some of the other place names we've seen mentioned in this photo album—places like Ballinora and Grange Cottages.

Thus, my first guess that might lead us to some real people and their actual identities is that Mrs. P. Hawkes is the older woman in the photo album whom we first met, labeled as "Grannie."

Now, we'll have to test out that hypothesis... 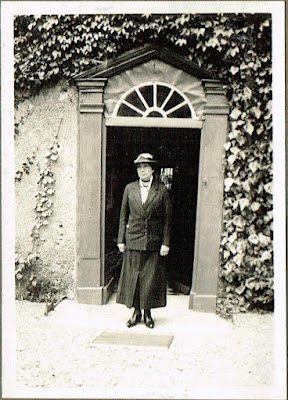