Just Off the Boat


Discovering the real first name of Penrose Hawkes—the man whose photographs were included in a forsaken family photo album I found in an antique shop in northern California—helped lead to other discoveries. Penrose, after all, was a middle name; proper searches for documents to serve as evidence are generally conducted using first names. Thus, finding the true full name led to more discoveries about this John Pim Penrose Hawkes.

A great find was a copy of Penrose's application for a U.S. passport. This, as it turned out, filled in many of the blanks that had us wondering how this Irish-born young man had ended up, alone, in the relatively rural setting of upstate New York by the time he turned sixteen.

When Penrose applied for his U.S. passport, he had been in the country for almost seven years. He had already managed to become a naturalized citizen at the age of twenty three, barely two weeks before making this application.

Apparently, the reason for his passport request was to return home to visit family during the summer of 1923. While it must have been a long-anticipated return for both adventuring son and his parents, it certainly also provided a welcome record for those of us wanting to know more about him nearly ninety five years later.

If all the declarations made for this document were correct, they provide much for us to learn about Penrose's early days—details genealogists thrive on discovering.

From this document, we learn that Penrose was born March 22, 1900, in the town of Bandon in County Cork, Ireland. That location had been established in Ireland by English settlers in the early 1600s and subsequently mired by a longstanding history once granting residence solely to fellow Protestants. As we'll soon see, ancestors of the Hawkes family had been among those early British settlers in Ireland.

Penrose's passport application revealed that his was the exact same name as his father's—John Pim Penrose Hawkes—and that his father, too, had been born in County Cork.

Since the passport application indicated that the younger Penrose had emigrated in June, 1916, perhaps his father, with full apprehension of then-current events, had considered the risk of what was yet to come in Ireland and wanted to send his only son safely beyond any threat to his welfare. After all, it barely had been two months since the ominous occurrence of the Easter Rising. By June of that same year, son Penrose was safely in Liverpool, England, preparing to sail for America.

Soon after, the sixteen year old Penrose had arrived in New York harbor and made his way northward to the city of Corning—a small town, then, of almost fifteen thousand residents, whose population is much the same today as it was in 1900 when Penrose was born. What drew Penrose to that location was a key member of the extended Hawkes family, a relative who had lived there—and thrived, apparently—for the past fifty years or more.

While statements may be found indicating that the specific reason Penrose went to Corning was at the bidding of his aging relative, taking in the broader picture of the history of Ireland at the time of his departure—especially considering his young age at the time—leads me to wonder whether there was an alternate impetus from across the ocean urging his departure from his homeland. Corning, then, became Penrose's safe haven during the storms about to overtake Ireland. 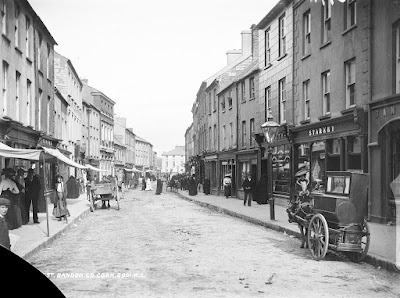 Above: Main Street in Bandon, County Cork, much as it appeared when Penrose Hawkes was born there in 1900; photograph courtesy The Lawrence Photograph Collection at the National Library of Ireland via Wikipedia; in the public domain.
© Copyright 2011 – 2021 by Jacqi Stevens at 2:54:00 AM