Off the Shelf:
The Forgotten Irish


It isn't often that I get to buy a book during the year preceding its official release, but that's exactly what happened with the title I want to feature this month.

Granted, the idea of this monthly post is to remind me—a book lover smitten with an insidious disease causing the victim to purchase volumes which then remain shelved and, unfortunately, unread—to go back to that bookshelf, pull the books down one by one and, for crying out loud, actually, you know, read them.

True confession number two: I have a second weakness. This one, I suspect, is genetic, for it was my mother and sister before me who would conspire—even two months ahead of time, and spanning the six hundred miles that separated them—to purchase books as Christmas presents for me, and then ship said present between themselves, so they could each first read the book before gifting it to unsuspecting me. I have now followed suit, as I purchase books for my anthropologically-minded daughter.

"Oh, this one would be great for her to read," I'd think, all the while secretly plotting how I could read it first.

Such were the machinations at play, when I fortuitously stumbled upon a promotional announcement for conflict archaeologist Damian Shiels' upcoming book, The Forgotten Irish.

I'm not sure how I first learned about the book. Granted, I do a lot of research on our family's Irish heritage. Having a daughter recently spend two semesters studying abroad at University College Cork led me to follow a number of Irish archaeology types on Twitter and other social media. And naturally, I follow several blogs on Irish genealogy, archaeology and related topics. Damian Shiels had already surfaced in the mix, long before I discovered the launch of his new book.

Perhaps it was the review I spotted on Claire Santry's indispensable blog, Irish Genealogy News that drew me towards considering getting a copy for myself my daughter. In Claire's mind, The Forgotten Irish was "easily my book of the year."

Then, too, the premise of the book—using the widows and dependents pension files from the American Civil War era "to build a partial picture of the lives of individual Irish emigrant families"—piqued my interest. It was my kind of pursuit. Written by a researcher who had already demonstrated his prowess through his earlier edition, The Irish in the American Civil War, this newly-launched volume promised to delve into material which could breathe some life into the micro-histories of these forgotten people.

I'm not sure how it was, but just in time for some early Christmas shopping in 2016, I spotted a mention of a bargain price for The Forgotten Irish at the Book Depository. Yes, the book was published in the U.K. Yes, that meant shipping it across an ocean and then a sizeable continent. But yes, the company was willing to ship it worldwide for free plus sell it to me at an unbelievable price. I couldn't wait 'til Christmas!

So, technically, the book did sit on my shelf for a while—at least through the two months since its arrival before Christmas—before I got to pull it down and feature it on my monthly book post. I assuaged my guilty book-buying conscience by not reading it before actually gifting it to its intended recipient. (It is a paperback, after all.)

And now, I'm reading it.

There was one small puzzle, though. Being a Christmas gift and all, of course it will be an item whose purchase date I'll remember clearly. So I was quite surprised to see a tweet by the author yesterday, which advised the official launch of The Forgotten Irish would occur on January 26. That, as far as I can tell, means January of 2017. 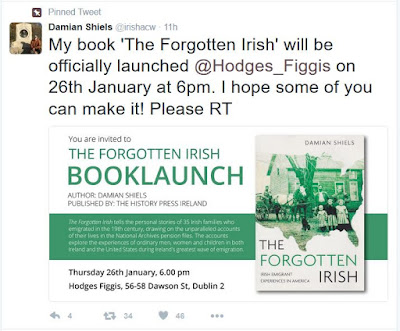 How is this? I double checked for dates. Could this have been an announcement for January of 2016? If not, oh, how I wish I were headed to Dublin right now!

According to its Google entry, the book was released on October 6, 2016 by its publisher, The History Press. But if you look up The Forgotten Irish on Amazon, the blurb indicates the book will not be available until May, 2017. That's if you want to wait until American outlets make the volume available. I certainly didn't. Besides, while speeding up the process by shopping overseas, you certainly can't beat the price.

Meanwhile, I've overcome my mother's weakness for taking a sneak peak at reading the very books she's about to give to others. I now read those books after Christmas. Yeah, like when the recipient leaves the country to do some post-holiday winter-break traveling. After all, it wouldn't be like she is taking the book with her. May as well seize the moment. I've got a couple hundred pages yet to cover before she gets home.