Bride Park: Not Just a Kennel


Page by page, that discarded family photo album I had found now started providing more clues. The more details spotted on previous pages, the more understanding the exercise yielded. It took a process, first, of linking internal clues to each other, then, when enough of those were aggregated, taking the leap into the real world to try out our hypothesis and see if it led us to any real people.

Before jumping to any conclusions, though, it might be helpful to view just one more page in the album I rescued from our local antique shop. This one allows us to step back from that "hall door" we had already seen in the photograph of "Grannie" and take in a view of the house through which the entrance led.

Not only did this photograph provided a glimpse of just what the place looked like in 1936, but its caption revealed to us that the building, itself, was called Bride Park. 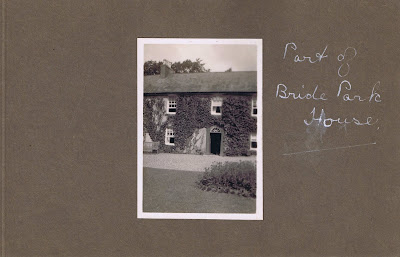 The question now became: where, exactly, would that Bride Park home be located? If the house known as Bride Park was the residence of the "Mrs. P. Hawkes of Ovens" whose prize-winning West Highland White Terrier came from a kennel bearing that same name, it would figure that Bride Park would be located in Ovens.

Fortunately, questions like this are serving to reawaken some of my hibernating research memories from our family's trip to Ireland, two years ago. One site I had found back then, upon discovering an Irish relative's address led to the ruins of a now-deserted two story home, was a useful database set up by the National University of Ireland in Galway. Called the Landed Estates Database, it catalogs properties in Ireland by location, by family names and by estate names.

My next step, obviously, was to go straight to the NUI database and see what could be found under the heading, "Bride Park." There was indeed an entry, from which I gleaned that there is also a townland bearing the same name as the estate, itself.

The entry provided a brief historical rundown on the first owners of the Bride Park estate. The house was built in the 1770s by a Reverend Stephen Rolleston, changing hands in the early 1800s to a Reverend Spread. By the mid 1800s, the owner was a man named Thomas Power, but there had apparently been others on the title, prior to that point.

None of the surnames, however, included that of the woman whose kennel shared the name of this estate. There was no mention of anyone named Hawkes.

That was where I slowed down to take in all the details on this brief house history. While I was somewhat consoled by spotting the mention of new owners taking over in the early 1900s, that hardly mattered when I realized what the map on the page was shouting at me: this Bride Park was on the wrong side of the city of Cork. If Mrs. P. Hawkes was from Ovens, she had to live in a place to the west of Cork, not the east. And the NUI Galway site had this Bride Park situated to the northeast of the city.

Now I understand why, despite a recent renovation, that Bride Park house didn't quite look the same as our photograph. It wasn't the same house!

That left me wondering: should I be following the lead of the name of the kennel owner, Mrs. P. Hawkes? Or should I pursue further clues by examining more details about this property which appeared to be the rightful claimant to the estate name Bride Park?

Not only that, but another possibility occurred to me: what if, like many "photo shoots" of our current day, this unnamed family was just on an outing to a beautiful, photogenic locale which would serve as a pleasant backdrop for their family portraits? 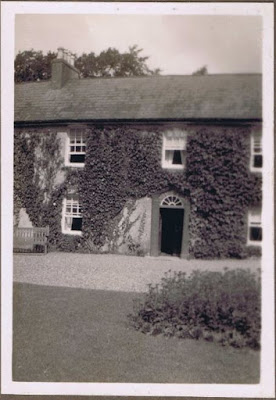