You can learn quite a bit about a person by watching him interact with animals. Perhaps that also goes for discerning the fine details regarding those peopling one's family history.

We certainly gleaned some clues as to the personality of the woman who likely added the white-inked notes to the photograph album I found, relinquished to its fate in a nearby antique store. If nothing else, she was fond of a horse she may well have ridden in her own childhood, long before the pictures snapped for that 1936 album.

She—or someone else in her family—also cherished other pets. At least one other four-footed creature found a central location in the collection sent by Harry and Alice to an unknown recipient that Christmas so long ago. 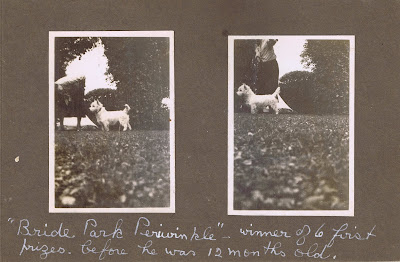 "Bride Park Periwinkle"—winner of 6 first prizes, before he was 12 months old.


When I saw this picture and explanation in the album, I thought maybe it could serve as a way to glean some clues about the album's family. After all, my own family has had a penchant for purebreds. Before my husband and I were married, he owned two Lhasa Apsos from a local breeder here in California. I, for my part, was already smitten with a plucky Sealyham Terrier I had purchased from a kennel in Cleveland, Ohio.

Both of us knew that, for every handsome canine called "Spot" or "Fido," there was actually an incredibly long and unwieldy real name registered in an AKC pedigree. "Spot" was just a handy working name. Most names had a set structure to them, the first part actually representing the name of the kennel where the dog had been bred.

In the case of this 1936 photograph, then, "Periwinkle" would likely be the dog's name, and "Bride Park" would be the name of the kennel.

Easy, I thought. All I need to do is contact the AKC to look up the name of the kennel or search for a pedigree containing that dog's name.

Even though the photograph was not very clear—the subject wasn't really framed to the best advantage—it gave enough clues for me to determine the dog was a "Westie." A canine cousin to my favorite breed, the sealyham terrier, the West Highland White Terrier has long been a popular breed in the United States.

Try as I might, though, searching online for any history of Westie breeders to get an idea of who was behind the Bride Park kennel turned out to be useless. The hint was leading me...nowhere.

Of course, that was before I started sharing this album with readers here at A Family Tapestry. And it certainly was before I slowed down enough to write about the details I was noticing. It helps to put the brakes on, sometimes, and linger over all these enigmatic clues.

A few of the details that emerged, once we all started taking a close look at what we were finding here, included the idea that this might not be a household located in the United States. Thus, searching for any leads through the American Kennel Club might not yield the type of information we'd be seeking. Place names we've already noticed in this album include Crosshaven and Ballinora, both places definitely traced to one location: Ireland.

Could this be a kennel in Ireland? If so, could locating the details on "Bride Park" kennel help us figure out the name of the family who originated this album?

There was one more hint that didn't even occur to me until just the other day. You may not be able to see it in the copy here, due to the quality of the photographs in today's post, but look closely at the figure standing with the dog in both of these pictures. The person attending the dog and putting Periwinkle through those show dog paces is wearing an outfit we've seen in another one of the photographs in this album. 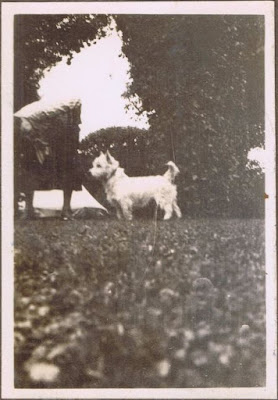