Where He Got His Name


Perhaps, just as I did when I found that forsaken family photograph album in a local antique store, you are wondering where the album's featured subject got his unusual name. After all, if it weren't for spotting the name Penrose in the pages of that 1936 album, I likely would not have purchased it.

Now that we've learned his name was actually Penrose Hawkes—and have discovered the family history attached to that name—it might be appropriate to take another genealogical detour to discover yet another branch of the Hawkes family roots.

As we've already mentioned, Penrose's full name was actually John Pim Penrose Hawkes, just as was his father's name before him. It was the senior Penrose's older brother who was the second-in-line to inherit the family's property, and thus chose, rather than a possibly hopeless waiting game, to leave his homeland in County Cork and emigrate to New York. That fortuitous decision led, over fifty years later, to the younger Penrose taking up a position in his uncle's by-then successful enterprise, the cut glass manufacturers T. G. Hawkes and Company.

The family's link to the world of cut glass, however, didn't start with Thomas Gibbons Hawkes' decision to immigrate to a New World. The Hawkes family, as it turns out, was linked to at least one other such concern. To see the connection, however, requires a detour through the Hawkes family genealogy.

Moving back through the generations from the elder Penrose Hawkes, we have his father, known as Quayle Welsted Hawkes. He, in turn, was the sixth son of Samuel Hawkes, founder of the estate in County Cork known as Hawkemount.

The detail of interest in this genealogy is actually not another Hawkes, however, but the wife of this Samuel Hawkes: a woman by the name of Sally Penrose.

Sally was not from Cork, herself, but came from a family residing in the nearby city of Waterford. As fourth daughter of Samuel and Mary Randall Penrose, Sally provided, through this family connection, the Hawkes family's claim to connection to another notable crystal concern.

Knowing the history of that city's glass works becomes important to this story, for it reaches back to two Penrose brothers in 1783. That is when George and William Penrose established a glass manufacturing concern in Waterford. The business experienced success through the year 1796, at which point William died. Within a year, the business was put up for sale and eventually changed hands. From then on, the concern started by the Penroses underwent a meandering history of changing ownerships, from which, eventually, arose the products we now know as Waterford Crystal.

The story of Waterford Crystal's evolution through the centuries has been ably represented by a couple online resources. If you are interested, you might enjoy the account as told by the Waterford Visitor Centre. In tracing the history of early Waterford Crystal, however, what stood out the most to me was one detail: the earliest forms of that coveted product, "as fine a quality as any in Europe," was known specifically as Penrose Crystal. 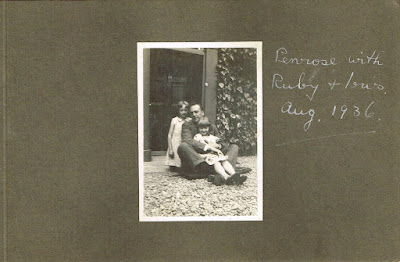 
© Copyright 2011 – 2022 by Jacqi Stevens at 2:50:00 AM
Email ThisBlogThis!Share to TwitterShare to FacebookShare to Pinterest
Labels: County Cork, Ephemera, Ireland, Occupations