A Few Other Details


There were a few other details embedded within the sad note in the 1944 Corning Leader article on Marion Fishback Hawkes' passing. Attending to those details might do us some good in our pursuit of just who the Harry and Alice of our mystery photo album might have been.

Along with the article's details on the date and location of Penrose Hawkes' wife's funeral, a brief paragraph covered the significant points of Marion's life. As a young woman during the years of World War I, Marion apparently opted for the cutting-edge choice of inserting herself in the midst of the war cause. 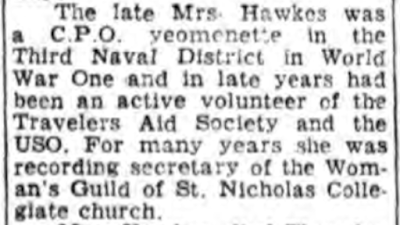 The late Mrs. Hawkes was a C.P.O. yeomanette in the Third Naval District in World War One and in late years had been an active volunteer of the Travelers Aid Society and the USO. For many years she was recording secretary of the Woman's Guild of St. Nicholas Collegiate church.


What was unofficially dubbed yeomanettes was a designation properly known as the rank of Yeoman (F) in the U.S. Naval Reserve. Following the lead of Loretta Perfectus Walsh, sworn in as the U.S. Navy's first woman to serve as petty officer on March 21, 1917, eleven thousand women volunteered to join her in that historic role as part of the Naval Reserves. One of those young women was Marion Fishback.

The war lasted for another twenty months after establishment of the rank of Yeoman (F). It is unclear when Marion chose to join the ranks of this new classification—and when she attained the rank of C.P.O.—but reading between the lines in her obituary we learn of her part in that groundbreaking movement.

Her other activities listed in this brief eulogy showed a woman who continued a habit of involvement in the lives of others, and help to paint a picture of the type of person she was.

There was one more detail, however, which didn't focus so much on who Marion was, but rather serves to lead us to clues on how Marion might have eventually become part of the Hawkes family. It was a brief mention—and, singularly, the lone mention—of someone who attended the funeral. A mere blip in the otherwise routine business of composing an obituary, that one sentence insertion stepped into the narrative, then unobtrusively slipped back out again, without further explanation.