Taking on the task of deciphering the hints in a family photo album can go one of two ways. Either there are enough details in the picture labels to clearly point to the identity of the subjects, or there is such an abysmal lack that the photos remain a mystery despite any attempts otherwise.

But really: when do we ever come across that former option? Even in the best of labels, who sends a family member a photo having both first and last name provided? That would be awkward. Of course your family would know who Alice is. Or Harry. They are family. You've known these people for their entire lives.

Thus, we are left with Harry and Alice. And Ruby and Iris. And we aren't one bit wiser for having learned their names. After all, we're strangers—unsuspecting interlopers on the pages of a Christmas gift sent from one family member to another, back in 1936.

When I found this photo album, discarded in a basement bin of a local antique shop, I was delighted to see the white-inked notes alongside each of the photos. And then disappointed when I realized none of the names provided included surnames. I was so hoping to be able to do just what my mentor—blogger "Far Side of Fifty" of Forgotten Old Photos—does: rescue "orphan" photos, identify the subjects, and then return the photos to appreciative family members.

Despite having no indication of surnames in this album, there was still something drawing me to buy it. There was this one subject, wandering through the pages, making sulky cameo appearances hither and yon. His name was Penrose.

How many Penroses can there be out there, I reasoned. And promptly made my purchase.

In my mind, Penrose was the grumpy husband of "self"—whoever that was—and father of the two darling girls, Ruby and Iris. All that was needed was to traipse through all the entries that can be found online for two sisters with those names, along with a father named Penrose. This will be simple, I thought.

As it turned out—though the verdict is far from decided—that was not the case. I now lean towards seeing Harry and Alice—though not necessarily the Alice of yesterday's photograph—as the parents of Ruby and Iris. And Penrose as someone's near-petulant (though very middle-aged) brother, not so graciously enduring the affairs of a family reunion or other obligatory social gathering.

So today, meet Penrose. Unfortunately, his first appearance is in a poorly focused portrait, but I want to include it because, despite the fuzzy likeness, he will probably be the one leading us to determine just who this family really was. 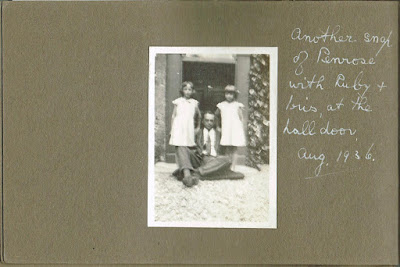 Despite the label stating "another snap," this is actually Penrose's first appearance in the order of the album. However, it is not the first we have seen that doorway. Remember the photograph of "Grannie"? That was the same doorway, though framed for the picture more carefully. Note that it is labeled here as the "hall door." Whatever the significance of such a label, it leads to the conclusion that the main door would be even more imposing—and likely be attached to a significant structure for the place called home by this family. Wherever that might be.

Even without the surname, a given name like Penrose should fuel some promising genealogical searches. After all, there can't be too many men out there with a name like that. Let's just hope it wasn't someone's pet name; we need something official to lead us to more clues. 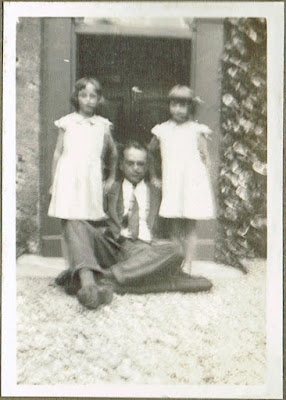