While it has been gratifying to figure out who the unidentified people were in a photo album I found at a local antique store, I'm not satisfied to stop there. You know I have to find out more about this family.

My quest right now is to figure out just who the Harry and Alice were who sent the album as a Christmas gift, back in 1936. Perhaps knowing exactly who that couple was will reveal more clues about who the recipient of their creative family photo-documentary might have been.

Since the most obvious name to follow from the album was that of Penrose Hawkes, Irish immigrant to Corning, New York, I tried my hand at doing a search on his name in all available digitized newspaper archives. Let me tell you: there were a lot of results found at the Old Fulton NY Post Cards site.

One hit I remember in particular was a 1933 wedding announcement I found in the Elmira, New York, Star-Gazette. In that two-column spread, Penrose's name showed up as merely an "also ran"—a mere blip of a mention, stating he had served as usher at his cousin's wedding. I had to go back and double check that entry...out of over two hundred matches.

As it turned out, the article was covering the wedding of a different cousin, not Alice Hawkes. But there was an Alice mentioned—an Alice Dewart Robinson, "cousin of the bride."

This, as it turned out, was yet another Alice in the extended Hawkes family—bringing us farther and farther away from our goal of zeroing in on the Alice of the Irish photo album. Yet the exercise did provide some clues about the Alice we were introduced to yesterday, the one who married a Canadian man named Robinson. That Alice came with an interesting story of her own, as the newspaper entries revealed. We'll begin with some links to help trace who she was and continue tomorrow with the rest of the story on what became of her.

The first clue came from a retrospective column in the Corning Evening Leader from January 25, 1940. Labeled "Looking Backward Through Files of The Leader," the column focused on that same date in 1915. There, a brief mention told us, "Miss Alice Hawkes sailed for Ireland to spend some time at Inniscara House, the Hawkes family estate."

Remember our story about the Hawkes family member who, realizing his place in the family constellation as second son would never net him the family estate, left his homeland to seek his fortune in America? Perhaps, since Thomas G. Hawkes' older brother did predecease him, he may have inherited his father's property back in County Cork, after all.

Why do I mention that? Because, according to this June 8, 1902, article in the Buffalo Courier, Alice was indeed identified as Thomas G. Hawkes' daughter:


A front page insertion in the Bath, New York, Steuben Farmers' Advocate provided the next link in the proof. The January 5, 1916, edition informed us,


Announcement has been made of the engagement of Miss Alice Hawkes, younger daughter of the late Mr. and Mrs. Thomas G. Hawkes, of Corning, to Edward Hartley Robinson of Toronto.


Thus, with that one announcement, we receive not only confirmation of who this Alice Hawkes actually was, but have our feeble hopes further dashed upon discovery that the "H" in her fiance's name did not, in fact, stand for the hoped-for Harry.

I leave it up to you to decide whether we can stretch that detail far enough to fudge it and make this Hartley party to our sought-after couple, the Harry and Alice signing the greeting on that mystery photo album presented to an unnamed someone in December, 1936.

In the meantime, though I've given up this segment of the chase, there are a few other details that this Alice deserves having mentioned in her memory. Let's not leave her trail—nor that of the other Alice mentioned here today—without following up on a few other details. 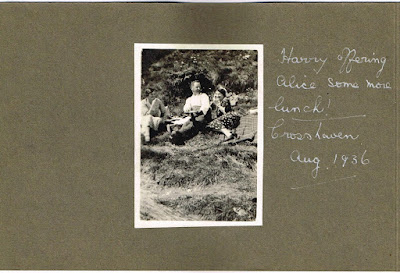