It hasn't been lost on serious genealogical researchers that maps are among our best tools for unraveling tangled family stories. Along with a well-constructed timeline, a map can help us discern the trajectory of migrating families, whether moving cross-country, or halfway around the world. Maps allow us a local view of places which otherwise would have been mere foreign concepts.

When I first discovered the photograph album we've been inspecting, I thought there were very few clues which could help us uncover the identity of the family shown on its pages. After all, most of the names were given names, not surnames. It's hard to figure out identities with that alone, even if some of the names—like Ruby or Iris—are less common.

However, with the addition of labels naming locations, we get a boost in this guessing game. Along with the other location clues we've already gleaned, it will, indeed, help us zero in on an origin for this collection of photographs.

The confirming clue came in the form of another picture of Alice. Granted, this album I rescued from a basement bin at a local antique store is far, far removed from the location named in Alice's snapshot. Unlike the album's California location, this clue aligns nicely with the other locations named in previous pages—places like Grange Cottage and Ballinora.

All that was mentioned on this page in the album was the subject's given name and the place where the picture was taken. 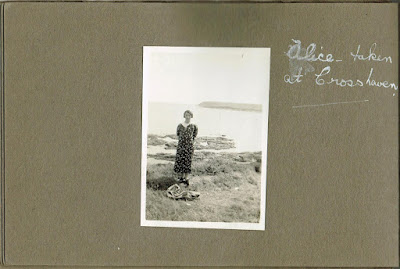 Once again, there is only one choice for location of the place called Crosshaven: towards the opening of the inlet leading to Cobh, and ultimately to Cork harbor. Anyone living near the Grange Cottage we've suspected is our location might consider a trip to Crosshaven the equivalent of spending a day at the seashore.

Still, we can't be quite sure whether this is a resident of a place called Grange Cottage visiting Crosshaven, or a visitor taking in both locations—plus Ballinora—on a grand tour of Ireland. But the geographical references sure do help isolate some possibilities. With a few more family names, it might be even more useful. 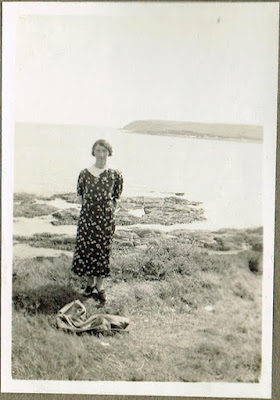