A Sad Turn of Events


As doubtless having put in his stint as Corning's Most Eligible Bachelor for far longer than a man should be entitled to, the news of Penrose Hawkes' New York City marriage to Marion Fishback in 1937 likely was welcome news for those wishing he would settle down and enjoy a home life.

That season of marital bliss was not destined to last long, however. A news report issued only a few years later seemed to arrive all too soon from the Hawkes' new home in Manhattan, where they had been residing since at least the time of the 1940 census. 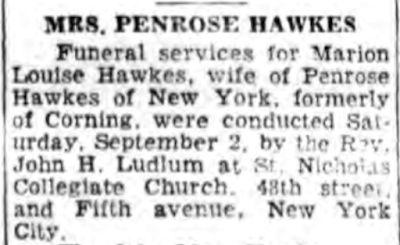 
Tucked within the items on the tenth page of the September 5, 1944, edition of the Corning, New York, Leader, the announcement was an unwelcome one, though evidently not an unexpected one. Still, it was a premature turn of events. After all, though this was a late marriage for Penrose, we discovered from the marriage record as well as their self-reported ages on the census record that Marion would have been only forty four years of age at the time of her passing.

Though this entry may have seemed like a brief funeral notice, the article developed into an obituary of sorts, providing more information on the circumstances. 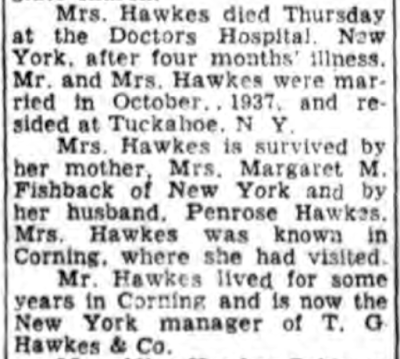 Mrs. Hawkes died Thursday at the Doctors Hospital, New York, after four months' illness. Mr. and Mrs. Hawkes were married in October, 1937, and resided at Tuckahoe, N. Y.
Mrs. Hawkes is survived by her mother, Mrs. Margaret M. Fishback of New York and by her husband, Penrose Hawkes. Mrs. Hawkes was known in Corning, where she had visited.
Mr. Hawkes lived for some years in Corning and is now the New York manager of T. G. Hawkes & Co.


Penrose and Marion had settled in the New York metro area because Penrose had been managing the T. G. Hawkes sales office in the city. Presumably, the Tuckahoe referred to by the paper was the village in Westchester County, making a short commute for Penrose, rather than the hamlet out by the Hamptons on the eastern end of Long Island—though the latter might have been a more likely place to encounter his usual customers.

It was not surprising to learn that Penrose's bride of only seven years had not left him any children. After all, the marriage came later in life for her as well as for her husband. Then, too, health issues may have burdened her for more than the four months mentioned in the newspaper notice.

Far removed from that sad departure—as well as by the fact that neither Marion nor Penrose were my relatives but merely subjects of a search sparked by finding an abandoned photo album—my main question upon this discovery was more practical. If there were no children left to Penrose, who was it who inherited that family photo album after it was sent by Harry and Alice in 1936? What—or who—brought it on its journey far to the west of this former Irishman's adopted country?