The one enchanting thing about the start of the new year is that it is ripe with possibilities—possibilities that eventually grow into projects. As the year gets rolling and those projects get launched, that bright hope which comes with the luxury of contemplating possibilities can undergo some tarnishing. But never mind that for now. Let's bask in the inner warmth of those possibilities, shall we?

Picking up the tale of that mysterious Christmas gift found abandoned in a local antique shop, we are ready to consider the possibilities uncovered from its pages. We've already been properly introduced to several of the players revealed in just the first few of the album's pages—at least, as properly as possible, considering the circumstances.

We've already met Harry and "Self"—the anonymous writer behind those white ink notes on each of the album's pages. We've easily surmised that they are the couple who are the proud parents of the two young girls cavorting through the album's pages, Ruby and Iris. In addition, we've been introduced to a man named O'Malley and a woman called Alice, though we aren't yet sure how they connect to the family's story.

And, of course, there's Grannie. She's the one who seems most likely to have been mentioned in newspaper reports as the West Highland White Terrier owner identified as Mrs. P. Hawkes. In fact, there's a good chance she is the one whose home is the place called Bride Park House in the parish of Ovens in County Cork, Ireland.

Finding the surname Hawkes has indeed been a great help. Who knew it would be the family's dog that would lead us to uncover the mystery of this photo album? Yet it isn't entirely helpful; we have yet to determine just which of these players can claim that surname besides Grannie. Would it be "Self"? Or Harry?

One more player in this scene may also claim rights to that surname: the reticent shadow unwillingly captured in a few of the photographs in the album's opening pages. We've already seen him here, in a fuzzy composition with the ever-present Ruby and Iris. From that introduction, we've learned that his name was Penrose. But is it Mr. Penrose, with an unknown given name? Or may we presume he was Penrose Hawkes? How, exactly, does he connect to this family gathering? 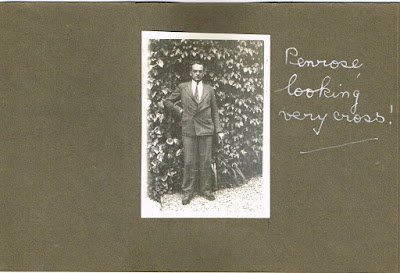 
Googling the name Penrose Hawkes does bring up some promising results. However, there are more entries to be found in the United States than in Ireland. 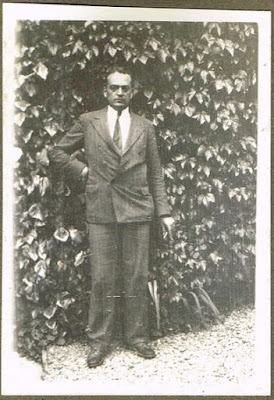