When delving into family history via photo albums, the first thing I look for, of course, are the names. Those names seem to be prime currency for forming a family tree; without the names, those photographs left to us—often by those no longer here to query about the details—are mere assemblages of unidentified faces.

Without the names, though, there is still something to be learned about a family's history. Place names, as we saw yesterday, can be useful in putting the pieces of the puzzle together.

There are other clues, however, though they are ones which require us to slow down and take in all the details that can be spotted in a photograph. The picture we saw yesterday can help with just that second type of clue.

If you've been following along here at A Family Tapestry since I began telling about the photograph album I found in an antique store in northern California, you may have noticed one of those details when I posted the picture, yesterday, of Alice at Crosshaven.

Doesn't that dress look familiar? I'd say it looks just like the one we saw at the beginning of the album, with the note, "Off on a spree." 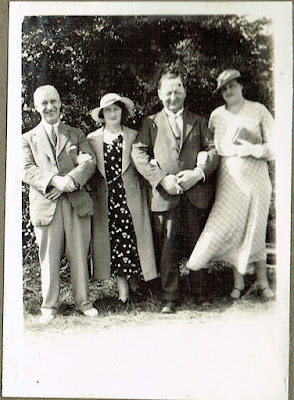 There, in a jovial foursome, were a Mr. W. O'Malley, Alice, Harry and the unidentified "self"—author of the album's commentary. The photo was dated in August of 1936. If the common order was applied by our mysterious album compiler—naming individuals in placement from left to right—then Alice would be the shorter woman in the dark, spotted dress.

I'd say we can safely presume just where that "spree" was taking this foursome: to Crosshaven. Wouldn't you? It certainly appears to be the same outfit Alice is wearing at each location—down to the necklace and the same shoes, sans hat and coat, of course.

Perhaps Alice was the only one willing to brave the wilds of the shore to have her photo taken with the backdrop of the harbor. Certainly one of the other three was snapping that picture. Where were the other two? 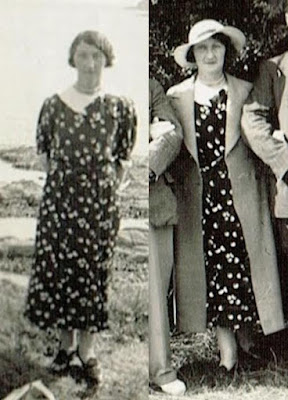