Usually, we'd assume a genealogical pursuit would mean following the winding trail of records back to an ancestor—a human ancestor. It isn't often that we'd find ourselves poring over records regarding our four-footed friends, just to determine the identity of a missing ancestor.

In the case of this mystery photo album from a neighboring town's antique shop, I've begun wondering whether this alternate approach might be the path yielding us the more viable clues to our puzzle's answer. If nothing else, we can at least discern the family featured in this album were animal lovers.

Of course, any family with children will find themselves, at some point, drawn to activities involving pets, so it makes sense that we found the picture, last week, with Harry and "self" and their two girls, Ruby and Iris, posed around a horse "in the yard."

It was not a sole cameo appearance made by that horse, however. On the next page in the album, another insertion featured a different composition with the same subject serving as focal point. 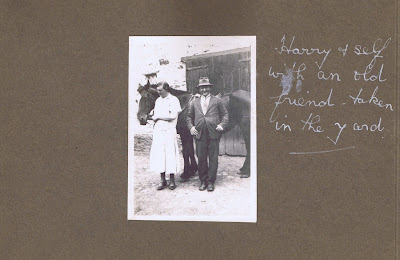 Harry + self with an old friend—taken in the yard.


With such a sentimental note, I wonder if it is "self" speaking here of, perhaps, her own childhood memories growing up with that very animal. While Harry is posed for the photographer, "self"—I'm presuming this is the Alice of the album cover's greeting—seems transported to another world, not at all concerned with the moment's task at hand of having her picture taken. Perhaps it was once she, rather than her daughter, who was perched on the saddle on the back of this "old friend" she is now visiting. 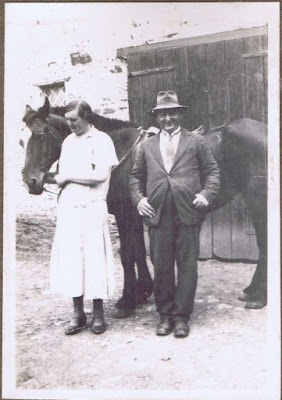 As it turns out, not only did a horse have a place in this family's hearts, but there was another four-footed friend who was part of their everyday life back in 1936, too. Though a much smaller specimen, this one came with a promising hint that I thought might yield the answer to who this family was.