Knowing The Rest of the Story

It occurred to me yesterday, after posting the newspaper article about young Flora Shields Montague’s devastating illness, that it might have suggested a tragic ending for the young bride.

Of course, I hadn’t thought of that at first—I know the rest of the story. Sometimes knowing something all too well does, indeed, constitute what some have called, “The Curse of Knowledge.”

If you aren’t familiar with that concept—“The Curse of Knowledge”—let me explain it by using some quotes from the people who coined the phrase, expanded upon its application, and use the concept in their professional efforts. Though these people work in fields not remotely associated with genealogy, I find the concept helpful in examining the difficulties we might encounter as we enthusiastically attempt to engage our friends and family with what we see as the fascinating topic of our family history. Perhaps it is partially because we are all too familiar with the stories we convey that we fail to engage our casual audiences. 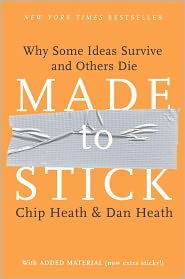 “We are in deep denial about the difficulty of getting a thought out of our own heads and into the heads of others,” explain Chip and Dan Heath, authors of the book Made To Stick: Why Some Ideas Survive and Others Die. “The better we get at generating great ideas—new insights and novel solutions—in our field of expertise, the more unnatural it becomes for us to communicate those ideas clearly.”

That’s why they call knowledge a “curse.”

Looking back to my post yesterday, in leaving poor Flora hanging between life and her anticipated demise, I can see now why it might have someone concerned. But I didn’t think much about it yesterday.

Because I knew the rest of the story.

Maybe you’ve experienced something similar, in trying to unpack a story you’ve discovered from your own family history. You know it’s a great story. But try telling your audience—whichever friend or relative you’ve happened to corner in your enthusiastic regaling of the intricate details. The missing link—the part you forgot to mention—might be just the key to help your listener grasp the significance of the event.

I wasn’t too worried about Flora, for instance, because of some very solid evidence I had found years ago. While I haven’t yet rescued it from my storage boxes of decades-old research notes, I do recall details indicating that it was Flora’s own husband, in a civil service capacity acquired much later in his professional standing, naming a new street—extending along the Shields property line, east and west from Blackstone Avenue in Fresno—after his father-in-law, William Shields. Every time I drive south, passing the Shields Avenue exit on California Highway 99, and know the instigator behind that sign’s origin, I am reminded that Flora and her husband did quite well in their long tenure in Fresno society.

I also knew that Flora’s name made it into two documents post-dating that 1897 newspaper report: the 1900 and 1910 census records for Fresno County.

There is no doubt in my mind, though, that something devastating happened to Flora and Frank. For one thing, they remained childless throughout their married life. In the 1900 census, Flora declared herself to have not been the mother of any children—though in 1910, she reversed that report to state that she had been the mother of one, though a child no longer alive. By 1920, Flora was listed having an occupation of Christian Science Practitioner.

Could some of the threatening health issues she surely endured throughout those decades have caused her not only physical trauma, but a crisis of faith as well?

That she survived the malady that prompted such dire newspaper reports as the one I shared with you yesterday is not only confirmed by the subsequent census reports, but also by the death record that demonstrated the age she attained at her passing. For someone assumed to not make it much past her twenties, Flora Shields Montague lived until March 3, 1963—giving her a lifespan of over eighty seven years.
© Copyright 2011 – 2022 by Jacqi Stevens at 2:42:00 AM
Email ThisBlogThis!Share to TwitterShare to FacebookShare to Pinterest
Labels: Books, California, Shields, To Tell the Story