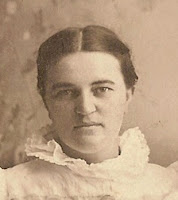 Now that you’ve been properly introduced to the young Ella May Shields, let me take you on a journey to retrace the steps of the Shields family of Illinois.

Ella’s parents—Irish immigrant William James Shields and the former Margaret Elizabeth Marsh—were married in Illinois. Best I can tell so far—albeit without the requisite documentation—the place was Genoa in DeKalb County, and the date was New Year’s Day of 1858. Of course, that information is subject to change with the slightest paper trace that it might have turned out differently.

An 1860 census—which I am not yet sure I can trust—shows William’s young family residing not in Illinois, but in Bourbon County of Kansas Territory. William shows up in that document, roughly at the appropriate age and from the right birthplace. His wife—if this is indeed the right person—was listed by her middle name, Elizabeth, rather than her first name, but otherwise everything else seems to be in order, from place of birth in New York, to current age. And baby Alice, their firstborn, shows a place of birth, just the year prior, in Illinois. So we see evidence that the family is already on the move.

Later census records show subsequent children—well, almost all of them—born in Illinois, however. And the 1870 record does confirm that the Shields family made their way back to a place then known as Drummer Grove Township in Ford County, Illinois.

But not for long.

Somehow, William, his wife and children Alice, Adolphus, Ella May, Lillian and Josephine, made it all the way from Illinois to somewhere in northern California before the baby of the family—Flora—made her appearance in 1876.

What I would love to learn is how they made the trip. Though my romantic mind yearns for stories of covered wagons making the trek over the rugged terrain, 1875 does seem a little beyond that scenario. But not by much.

If they had the money, the Shields family may more likely have traveled by the overland route of the first transcontinental railroad.

That, however, would only have brought them to the east bay. And I have records that they were farmers farther south in Fresno County by 1900.

Voting records provide hints that William Shields may have lived in San Francisco for a while—but then, how likely is it that the William Shields listed in some of those Great Register records would be my William Shields? There is no disputing that that is a fairly common name to be had.

The 1880 census, thankfully, pinpoints one place of residence in California: San Mateo County. Most likely, the Shields family lived for a while in or near Redwood City.

That provided the key—though momentary—link for Ella to meet her future husband. I say momentary, however, because by 1886, a William Shields shows up in the Great Record of California as a registered voter in Fresno County.

Just under three years later, Ella May exchanges vows with one Leon Samuel Bean of Redwood City, and the celebration is hardly over in Fresno before her beloved whisks her away from parents and siblings and back to her former hometown in Redwood City.

From that point on—though not necessarily staying for all that time in just one place—Ella Shields Bean is a Bay Area woman.