Missing Siblings and Those Aha! Moments

As much as I scoured all the online databases to discover those missing siblings of Ella Shields Bean—especially considering the mystery “David” and “Bill” I’m still puzzling over—I have, so far, had no luck.

I still think online genealogy databases are indispensable. Of course, more than that, I highly regard obtaining documents from their original source—provided one is so disposed as to travel to those locations. And I’m ever grateful for each digitized newspaper added to the growing presence of online resources.

But there is still more. Like relying on a shot in the dark, I sometimes go back to square one: that white page with the simple dialog box staring out at me from the middle of an empty page under the multi-colored “Google” banner. I enter my phrase—usually a full name, enclosed in quote marks—hit “Google Search” and hope for the best.

I never click “I’m Feeling Lucky,” for I seldom am.

Unless, of course, Google™ returns me the kind of hits I’m in the mood to see.

With the advent of Google Books, I’ve warmed considerably to the concept of Me, the Lucky Researcher. And those shots in the dark seem to find their target more frequently.

Consider the quandary I mentioned yesterday: the fact that the 1910 census showed Ella Shields Bean’s mom as the mother of eight children. Concerned that, try as I might, I could only find six, I did far more than what I’d consider my due diligence in tracking down the names of the missing two children.

Of course, in my efforts, I looked primarily in California—the state in which the family settled after removing from Illinois in the 1870s. It didn’t occur to me that the missing two children had died before the family’s arrival then. Even so, finding records of deaths prior to the 1870s in Illinois might have also been a challenge, had I pursued that possibility.

However, with my “shot in the dark,” last-ditch effort of entering the name of their father—William James Shields—in the Google™ search engine, I was reminded of one other resource: Google Books. 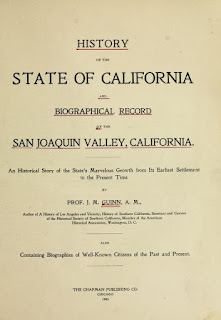 Originally popping up in the search results as a format at ebooksread.com, a biographical sketch for William Shields provided the answers I needed. In searching for a more readable—and clickable—format, I then discovered the same book, James Miller Guinn’s History of the State of California and Biographical Record of the San Joaquin Valley, California at another website. And there, on pages 1436 and 1437 (talk about long-winded!) of Guinn's book, was a thorough recounting of the family history of both William Shields and his wife, the former Elizabeth Margaret Marsh.

In the midst of that volume—originally published in 1902, the year of William Shields’ death—I found the details that answered my question about the missing two Shields children:

So it was to be Charles E. and William Alexander who were the missing two Shields children. With kudos to Google™ for both its search and book digitization programs, I now have a tentative—albeit undocumented—answer to my question about those 1910 census numbers.

In finding the answer to one question, it perpetuates another: who are Bill and David? I’m still no closer to finding the identities of these two mystery Shields connections than I was prior to this search. Such is the never-ending chain of genealogy research.
© Copyright 2011 – 2022 by Jacqi Stevens at 2:48:00 AM
Email ThisBlogThis!Share to TwitterShare to FacebookShare to Pinterest
Labels: California, Online Resources, Shields