Taking a Step Back in Time

While there are so many more photographs that I have yet to identify in the mystery box from Bill Bean and his sister, Leona Bean Grant, I think it is time to move on and delve into the stories of the previous generation.

You’ve already met their mother, Ella Shields Bean, in past posts, but let’s re-acquaint ourselves with the woman we’ll focus on in the next few days as we push the timeline back from the mid 1900s to the previous century.

Ella Bean may have sensed that she was not photogenic—or perhaps cared little for such “new-fangled” contraptions as Bill’s Polaroid cameras. She did, however, have a persistent son who loved to tinker with machines and see what they could do to make life easier or more enjoyable.

I imagine Bill—who, as an adult, lived for much of his younger married life as his mother’s next door neighbor—would often stop by his mom’s place, pop his head in the door, and call out, “Hey, mom, come look at this!”

Why do I imagine that?

Because I have a number of photographs of the aging Ella Bean, sitting at that very same  front entryway to her home, putting up with Bill’s photographic experiments. 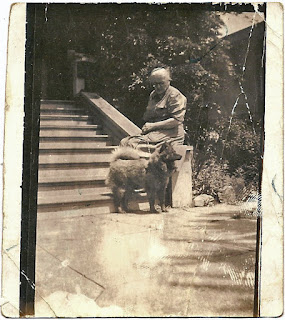 One—thankfully labeled on the reverse, “Mother + Chang, 1940”—even bears the imprint of someone’s misplaced fingerprints. I imagine those prints belong to Bill…in more ways than one.

Ella, who for several years also provided housing for her other son—Sam, Bill’s blind and deaf twin brother—was live-in grandmother to two active boys as well. Chang may well have provided some canine companionship not only for Ella, but for her young charges as well.

By 1940, the date of this photograph, Ella would have been seventy five years of age. She most likely had been living in that same home in Alameda, California, for over twenty years—a story we’ll take a closer look at in the next few days. 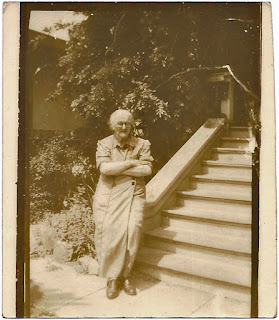 Another photo—making it seem much as if Ella did nothing all day but sit on her front stoop—was labeled, “Ella Shields Bean, 82 years.”

More likely, it was her son, once again saying, “Come on out in the sunlight and let me take your picture.”

By the time Ella reached that age, it would have been 1947—less than two years before her passing. And yet, she still retained that strong, no-nonsense appearance of several years prior. I often wonder how similar she might have been, at that age, to the way I remember her daughter Leona being in her older years. After all, in their younger years, Leona took after her mother so much.

Though there are very few treasures in Bill Bean’s mystery box of photographs that reveal the younger Ella Shields Bean, I have been able to retrace Ella’s steps and connect with her family stories through research I did years ago at the California State Library. Long before the advent of personal computers—and certainly before the age of the Internet—I was still able to ferret out gems regarding Ella May’s early years of marriage to Leon Samuel Bean, and even stories from her family after they settled in Fresno, California.

In the upcoming week, I’ll share some of those details as we turn our attention to what can be discovered about a much younger Ella Shields Bean.
© Copyright 2011 – 2022 by Jacqi Stevens at 2:48:00 AM
Email ThisBlogThis!Share to TwitterShare to FacebookShare to Pinterest
Labels: Bean, California, Shields