Settling Down to Married Life

One can hardly say that Ella Shields Bean had developed a “sense of place” in her early adult years. Having arrived from her native Illinois along with her family by 1875—when she was about ten years of age, herself—she spent some of her teen years living in San Francisco, and some of those years living in Redwood City. By the time she was twenty, her family had moved yet again to a farming community far removed from the northern California ambience of the Bay Area.

At least the family was still in California. However, that’s one huge state in which to say one is “still” together.

I have so much more to learn about this family—both the Shields branch and the Bean branch. Researching the Bean family pre-personal-computer-age, thankfully, was made somewhat easier by virtue of the Bean family’s arrival at about the same time as the Gold Rush. While I didn’t have the benefit of the multiple online resources we’re blessed with today, it serendipitously turns out that a forty-five minute drive brings me to the California State Library—a place which, over the years, has accumulated an archive of every single newspaper ever published in the state.

Well…at least, that’s what the librarian told me at the time.

Among the collection of California newspapers duly indexed by meticulous librarians, the Bean family—as well as the Shields family in their later years—figured amply within the entries in the newspaper index. For which I’ve been ever grateful!

If I can locate where my own less-than-meticulous filing system doomed the photocopies of relevant articles to be filed, I’ll be able to share those tidbits with you in the next few days. I haven’t missed the fact that these particular issues are still not within the collections of those several online archival companies, so finding my copies will be our only opportunity to get that exact zing of the wording.

Leon was born in May of 1863, so he was only a couple years older than Ella. It makes me wonder if the two of them might have attended school together. Since neither family seemed particularly religious—unlike the other family lines I’ve researched, where I owe my success to the zealous record-keeping of the religious institutions to which those families were affiliated—I have no idea where else Ella might have met Leon. Perhaps Leon’s younger sister Blanche, who was the same age as Ella, might have been the link that connected the two, but how am I to find this out, now?

Leon and Blanche were born to two Maine residents who had, independent of one another, decided to make the long, harrowing journey around the horn from the northeastern coast of the country in Maine, all the way to San Francisco. If I remember correctly, father Samuel arrived first in San Francisco, followed later by his wife-to-be, Celia Hankerson.

I know little else about Leon in his younger years. Unfortunately, Bill Bean’s jumble of family photographs does not include any portraits of Leon before the one I found, labeled, “L. S. Bean, 48 yrs.”

At that point—which would have been about the year 1911—he looks formal, dignified, professional. 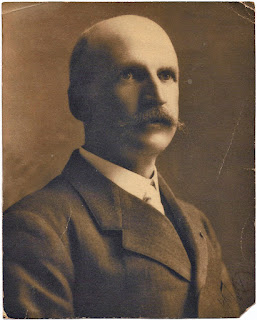 Such a professional portrait would not be surprising, considering Leon Bean was known not only in Redwood City and San Mateo County, but also in neighboring Santa Clara County, as a reputable general contractor.

However, the date of this photograph—the only one of Leon S. Bean left in his son’s collection—indicates that it was taken on the eve of an event sure to make a substantial difference in the life of each of his family members.

And those newspapers would be sure to tell of it.
© Copyright 2011 – 2022 by Jacqi Stevens at 2:48:00 AM
Email ThisBlogThis!Share to TwitterShare to FacebookShare to Pinterest
Labels: Bean, California, Hankerson, Maine, Shields