A Family Big Enough For Cousins 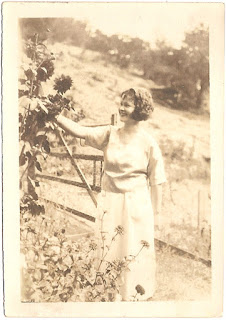 One hope all genealogy bloggers share in common is that of finding newly-discovered distant cousins also smitten with the obsession of family history research.

In a family as small as the Bean family of Redwood City, there was no branch even approximating a size making it eligible to contain distant cousins—except for one: the family line of Leon’s sister, Blanche Bean Watrous.

Blanche’s beau was a young man from Wisconsin. How he got to San Francisco, I’ve yet to discover. But Harry Griswold Watrous arrived in enough time to meet and marry Blanche in the parlor of her widowed mother’s home just after New Year’s Day in 1888.

By August of that same year, their first daughter arrived. Named after her maternal grandmother as well as her own mother, baby Celia’s name was the exact reversal of her mother’s own full name.

Another daughter followed in March of 1890. Named Clyde—for whom, or for what special purpose or custom I’m curious to learn—she will henceforth be the instigator of confusion for anyone researching this Watrous-Bean line. Indeed, I’ve seen documentation already asserting that this “she” was a “he.”

Yet again, Harry and Blanche announced the arrival of a daughter on November 27, 1896. And seven years later—almost to the day—the proud parents were finally able to announce the arrival of a son, whom they promptly named after his father (Harry) and his paternal grandfather (Orlando Watrous).

This mystery branch of the Bean family—of whom not a word was mentioned in all the years I’ve known Leona, Bill, and their grand-niece and grand-nephew—in their own time went on to marry and have children of their own. I’d like to think this would be a good sign for any hopeful connections of a genealogical kind—but I can’t for the life of me manage to trace these lines forward to the current generations. I seem to lose track way back in the early 1900s.

I do know the names of these Watrous children’s spouses, and even the names of some of their children. Yet, after that point, the trail seems to turn invisible.

I know oldest daughter Celia married a man in Marin County named Arthur Morwood Dodge, and that this couple had a daughter named after her maternal grandmother (the reversal of her mom’s name, to once again revert to Blanche Celia), and a son named mostly after his father (with a middle initial “W” for—I’m guessing—his mother’s maiden name). I can trace this family through the 1930 census, but lose track after that point. My best hope, at this point, for cousin connecting will be to obtain Celia’s obituary from a San Ramon area newspaper shortly after her Christmas day passing in 1977.

I had a bit better luck finding second-born Clyde in census records—mainly for the sad turn of events in which her marriage to an unknown Mr. Lane ended in divorce, requiring her to seek residence for herself and her two daughters back in her parents’ household by the time of the 1920 census. A later marriage to Albert Edward Harrison brought her back to the family hometown, where she died in 1976. Once again, a search through Bay Area newspapers may yield more information for those elusive distant cousins.

Like her older sister Celia, Elise married a man named Arthur. She married Arthur Morrell Thompson in 1918, and—as far as I can tell at this point—was the mother of one child: Wallace Thompson, born October 18, 1919. This child is the one for whom I can find the most recent information. Once again, if I can get my hands on an obituary, I’ll very possibly find names of some cousins.

The youngest child of Harry and Blanche—their son Harry Orlando—has proven to be the most difficult to track. While I’ve had no problem discovering his marriage record, apparently he and his wife divorced only a few years later. I’ve been able to find some very complimentary articles on Harry junior’s former wife, but no mention of whether the two had any children. Nor can I find any mention of a subsequent marriage. Come to think of it, until I find a copy of his 1971 obituary from a San Mateo County newspaper, there is little else I can say about the baby of the Watrous family.

Which all goes to show you that, standing between me and finding a whole passel of cousins—or, perhaps, a more modest amount of relatives—is nothing but three or four slips of newspaper.

Can it all come down to something as simple as that? 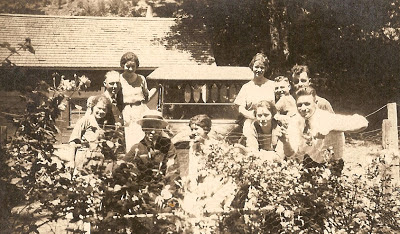 Photographs both from the private collection of Bill Bean; both of unidentified family members--very possibly of some of Bill's cousins. The picture at the top right is dated September 12, 1920, and the woman's facial features seem to resemble those of the young women in the group picture below. No labels on these photographs, other than the one date, leave these as mystery relatives unless a distant cousin shows up to help identify some faces.
© Copyright 2011 – 2022 by Jacqi Stevens at 2:50:00 AM
Email ThisBlogThis!Share to TwitterShare to FacebookShare to Pinterest
Labels: Bean, California, Unidentified Faces