If She Run Away

While Leon S. Bean was busy working on his several contracts in the Redwood City area, his young wife, Ella, had her hands full at home. She had Leona to keep her occupied.

A letter written on her husband’s business stationery by Ella to her father—dated all but the actual year—captures a moment in this young mother’s life. While she certainly sounds like she had her hands full, I’m not sure who is the more interesting character—the child with antics not unusual for someone of this age, or the mother with her own ways of handling parenting. 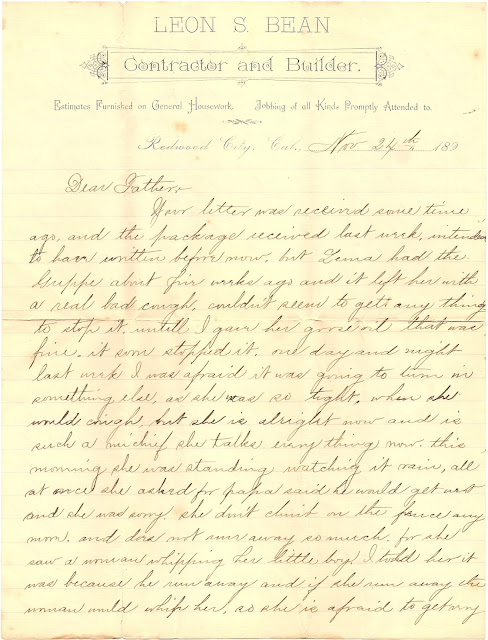 Dear Father:—
Your letter was received some time ago, and the package received last week, intended to have written before now, but Leona had the Grippe about five weeks ago and it left her with a real bad cough, couldn’t seem to get any thing to stop it, untill I gave her goose oil that was fine. It soon stopped it. One day and night last week I was afraid it was going to turn in something else, as she was so tight, when she would cough, but she is alright now and is such a mischief she talks everything now. This morning she was standing watching it rain, all at once she ached for papa said he would get wet and she was sorry. She don’t climb on the fence any more, and does not run away so much for she saw a woman whipping her little boy. I told her it was because he run away and if she run away the woman would whip her, so she is afraid to get very far from the gate.

© Copyright 2011 – 2022 by Jacqi Stevens at 2:53:00 AM
Email ThisBlogThis!Share to TwitterShare to FacebookShare to Pinterest
Labels: Bean, California, Family Letters, Shields