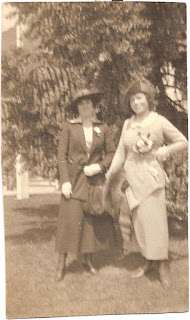 Think, for a minute, of the long-standing relationship between two close friends. They have a lot in common, but they also find that where one is weak, the other often compensates for that lack. They may find themselves operating in complementary roles, forming a close-knit partnership where each one shines at his or her own specialty—but each contributing toward the benefit of their association.

Sometimes, my online research tools seem to fall into those two symbiotic roles.

I love Ancestry.com, but it has its weak spots. Sometimes, I feel as if those shaking-leaf “hints” only show up after I point out the information to that vigilant search engine. What’s up with that?! I thought Ancestry.com was supposed to do the grunt work so I can collect all their search results and plug them into the correct spots.

Wouldn’t it be sweet if it did work that way? But it doesn’t.

That’s why I find myself sometimes operating two windows in tandem: one for Ancestry.com, where I plug in my findings as I go; the other for a search engine that actually does some searching, like FamilySearch.org.

Together, we bounce back and forth between documents found and data already listed, to evaluate the rightness of suggested matches.

With the search prowess of FamilySearch.org (or other programs, whether free or subscription-based), I sometimes unearth unexpected discoveries that way.

Take Leon S. Bean’s mother, the former Celia W. Hankerson of Maine. I had no idea she had married a second time, after the relatively early death of her husband, Samuel Bean. However, in playing around with data in the various fields (I sometimes deliberately leave some fields blank to see what else might rise to the surface), I came across a revelation: Celia W. Bean married a David E. Costellow of Sacramento, California, in 1896. Cross-checking with other databases, I saw notice of Celia Costello’s death in 1905, back in Redwood City, thanks to the local records of the San Mateo County Genealogical Society’s website. And that led me to the matching Find-A-Grave entry for Celia at Redwood City’s Union Cemetery—listed with that same new surname.

Yesterday, I mentioned discovering the maiden name of Celia’s grandson’s wife, Ellen. That discovery was owing to a small database—thanks again to the San Mateo County group—but you can be sure that, once I made that discovery, I was off and running, checking out everything I could about it.

Once again, I returned to my two trusty genealogical friends, Ancestry.com and FamilySearch.org. Bouncing back and forth, I worked that family line as far as I could, comparing notes between the two websites before entering any records in my online tree. Yet even then, Ancestry.com—like some demure damsel on a first date—was hesitant in offering up any hints until after I added more data. Frustrating.

I sometimes force the program’s hand by entering guesses in some of the fields. For instance, state of death. Even though I’m not one hundred percent sure, I’ll make an informed guess and see if it pokes Ancestry.com in the ribs. Sometimes, the ruse works, and I’ll be offered a suggestion of a specific record—which I can then examine by cross-checking on FamilySearch.org—and decide whether to accept or reject. Surprisingly, the suggestions are quite accurate, even if I instigated the discovery myself by feeding those fields my guesses instead of solid evidence.

I’m not sure whether Ancestry.com just needs to beef up its search mechanism or what the case may be. But I’ve learned that when it comes to Ancestry.com—as much as I appreciate what it has to offer—I’ve got to find a secondary program which will form a good partnership. Once that symbiotic relationship is on a roll, though, I can make some real headway in new family discoveries.


Photograph, above right, of two unidentified women; the woman to the left in the darker suit possibly Leona Bean Grant of Alameda, California, and a friend or cousin; from the private collection of William S. Bean.
© Copyright 2011 – 2022 by Jacqi Stevens at 2:42:00 AM
Email ThisBlogThis!Share to TwitterShare to FacebookShare to Pinterest
Labels: Bean, California, Documentation, Hankerson, Online Resources