Weddings are always happy occasions—unless, of course, you are the one who is paying for them.

Imagine the situation of one William James Shields, farmer, of various counties in northern California in the late 1800s. As was common for those times, William was the proud father of many children—among them, five daughters.

Moving his family west from Illinois in 1873, he settled them first in Marin County—the region, today, contiguous to the northern end of the Golden Gate Bridge. Not satisfied with his property just six miles south of what is now the city of Petaluma, he purchased acreage farther south, in San Benito County, and moved his family there in 1875.

By that time, Daughter Number One was nearing seventeen years of age.

If San Benito was the wide-open country of rolling hills and grazing land that it appears to be now, farming might have been just fine, but prospects for suitors most likely appeared dismal.

Perhaps that was not at the forefront of Mr. Shields’ mind when he opted to cash in on his property in San Benito a little over a year later, but the family’s move to San Mateo County improved Daughter Number One’s prospects considerably.

Announcements for Wedding Number One were soon made, and Alice V. Shields assumed her new name upon being happily married to Thomas Freeman Newell in 1877.

A lull in family happiness ensued—no doubt having nothing whatsoever to do with the fact that Child Number Two was a son and not a daughter. Neither would it have hinged upon the fact that father William Shields had decided, once again, to purchase property elsewhere.

It didn’t take long for Child Number Two to announce his intentions, and a marriage—to young Elsie, she of the maiden name I’ve yet to discover—followed in 1887.

Ripe for happiness, the now-settled farmer must have gone nearly delirious with joy, as Daughter Number Three followed suit close upon the heels of her brother, and—not to be undone—her just-older sister, Daughter Number Two (you thought I had miscounted, didn’t you?) snagged her man not seven months afterwards.

To recap: daughter Lillian Elizabeth Shields became the new Mrs. George W. Taylor in November, 1988, soon taking up residence far to the north in Mendocino County; and daughter Ella May Shields became the bride of Leon Samuel Bean in Fresno on June first of 1889, returning to the San Mateo County environs where her family had once resided.

Thankfully, all was followed by a peaceful seven years’ hiatus in which Papa Shields could regain whatever financial solvency he once commanded.

Not to be outdone, for the family’s grand finale, youngest daughter Flora bested her just-older sister Josephine by a scant thirty days, marrying Frank Luman Montague in Fresno on November 25, 1896, making this the family’s fifth wedding. Christmas Eve became the day of Josephine’s nuptials to another Fresno man, Wright Henry Spencer.

I can only imagine what a Christmas that must have been for their father. 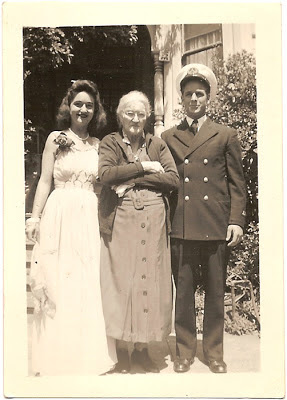 Above: Among the many unlabeled photographs in Bill Bean's collection, this unidentified young couple, dressed for a festive occasion, accompanies an elderly woman who looks very much like she might be Ella Shields Bean.
© Copyright 2011 – 2022 by Jacqi Stevens at 2:41:00 AM
Email ThisBlogThis!Share to TwitterShare to FacebookShare to Pinterest
Labels: Bean, California, Shields, Unidentified Faces, Weddings