Eureka! And that’s not the city in northern California I’m talking about.

While that may all be Greek to you, for me—as well as to Archimedes—the exclamation means I’m ready to celebrate. I’ve found something I’ve long been looking for.

Remember a while back, when I mentioned that, try as I might, I have never been able to locate the maiden name of the woman Bill Bean—the source of all my mystery photographs—had first married?

Well, I found it.

It took some poking around online.

Not in any of those big, overwhelming, one-stop-shopping kinds of genealogy websites. I found my answer in one of those local online hideaways I wrote about a few days ago.

I had gone back to the San Mateo County Genealogical Society’s website to check on some other details on the Leon Bean family I’ve been researching. While there, I realized I had only been utilizing one of the several online databases of material transcribed by this local society.

So I took the liberty of looking around.

Of course, I kept that focus on the Bean surname, since that is the family line I’m currently studying. I saw that the San Mateo group had transcribed a number of marriage records, so I thought I’d take a look at what might be available under the Bean heading.

At the time, I was puzzling over Leon Bean’s second marriage—the one to Emma, after his divorce from first wife Ella. While I had found a newspaper entry announcing the issuance of the marriage license, I still hadn’t found any confirmation that the wedding had actually taken place.

There must be some type of law—kind of like Murphy’s Law—that when you are looking for one specific thing, you will, instead, actually end up finding something else you needed, but weren’t looking for.

That’s what happened on my quest to find the actual marriage record for Leon and Emma: I found Bill and Ellen.

From the San Mateo County Genealogical Society website, clicking on the “database” choice in the left margin, the screen brought me to a page full of hyperlinked headings. When I selected “San Mateo County Marriages” and clicked on the alpha choice for my target surname, then scrolled down through the enormous page of listings for every “B” groom’s surname, I found the entry for William Samuel Bean.

Holding my breath and sincerely hoping this would be no genealogical doppelganger, I scanned from left to right, trying hard not to go cross-eyed from the densely packed page of data, until I saw my prize.

Ellen? Check! Actually, make that Ellen Marie. She was thirty five when she got married. She was from Kingsburg, a small town in Fresno County. Made sense—after all, that’s where Bill’s many Shields cousins lived.

The wedding date was March 9, 1929. The occasion was celebrated in Redwood City—odd, since Ellen’s family was still in the Central Valley, far removed from the south Bay Area location of the ceremony. Besides, Bill’s dad, Leon—the link back to Redwood City—was already passed away. And Bill’s mom, Ella, lived in the east Bay, in Alameda.

But I’m not going to trifle with such details now. I have a discovery to celebrate. And while I won’t leap from my desk and run through my city like Archimedes, I’m still excited to break through that brick wall. Maybe now, I can piece together a family tree and see if I can locate the identities of the faces in some of these mystery photos.

I don’t know how to say “Eureka” in Swedish, but just the same, I’m jumping up and down: I found it! 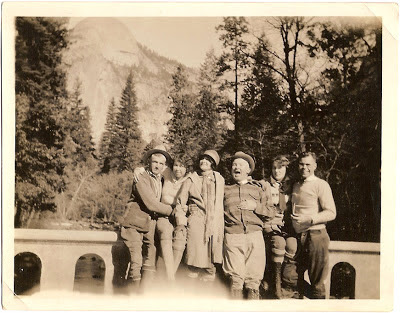 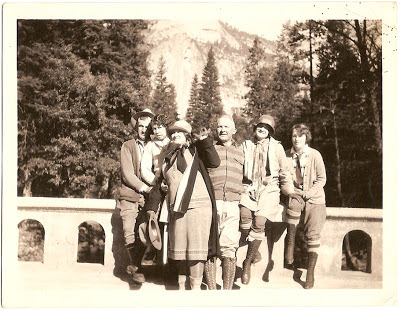 Photographs: Bill and Ellen Bean with unidentified friends--or possibly even relatives--most likely at Yosemite National Park. Bill and Ellen are on the far left in each of these photos. Most likely, that is Bill's sister Leona in the second picture, clowning around and swiping the hat of the man just behind her and to her left. Perhaps Leona and the man at the far right in the upper picture were swapping photography duties. If so, Leona seems to have fared much better as life of the party than in judging lighting and composition as photographer.
© Copyright 2011 – 2022 by Jacqi Stevens at 2:57:00 AM
Email ThisBlogThis!Share to TwitterShare to FacebookShare to Pinterest
Labels: Bean, California, Genealogical Organizations, Weddings