What Comes After “I Do”

With all the marriages in the Shields family I mentioned yesterday, the most logical next juncture—at least from the perspective of a researching genealogist—would be the arrival of the grandchildren. And with six children freshly married off, William and Elizabeth Shields did indeed see quite a few grandchildren in their day.

Times approaching the turn of the last century, however, cannot be viewed with quite the same lens of assumptions as we use in surveying our own times. As mentioned in the comments made yesterday by one reader—“Far Side of Fifty”—the perspective of the times sometimes led people to see things quite differently. I’m sure that would also apply to that traditional expectation of grandchildren.

A little snippet of news I stumbled upon recently in a Fresno newspaper caused me to stop in my tracks and realize how very different life was in the last hundred years.

I found the little article thanks to the search engine at Ancestry.com and their collection of historic newspapers. Sometimes—especially if you are researching family residing in the smaller towns—you can find all sorts of tidbits about daily routines in the life of your ancestors. Mostly, they are cheery recountings of who came to dinner last weekend, or which out of town guests were currently at so-and-so’s summer home.

This article wasn’t that kind of report.

Published in The Fresno Weekly Republican on Friday, January 15, 1897, the article was buried at the bottom of the sixth column on the seventh page, past reports of Superior Court business and results of exams for prospective grade school teachers. 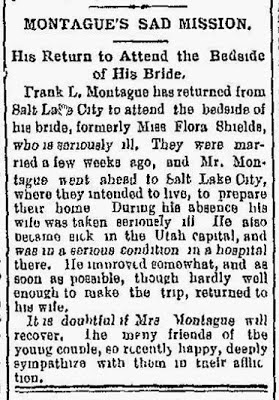 His Return to Attend the Bedside of His Bride.

Frank L. Montague has returned from Salt Lake City to attend the bedside of his bride, formerly Miss Flora Shields, who is seriously ill. They were married a few weeks ago, and Mr. Montague went ahead to Salt Lake City, where they intended to live, to prepare their home. During his absence his wife was taken seriously ill. He also became sick in the Utah capital, and was in a serious condition in a hospital there. He improved somewhat, and as soon as possible, though hardly well enough to make the trip, returned to his wife.
It is doubtful if Mrs. Montague will recover. The many friends of the young couple, so recently happy, deeply sympathize with them in their affliction.

© Copyright 2011 – 2022 by Jacqi Stevens at 2:49:00 AM
Email ThisBlogThis!Share to TwitterShare to FacebookShare to Pinterest
Labels: California, Newspaper Clippings, Shields