Knowing? Or Knowing About? 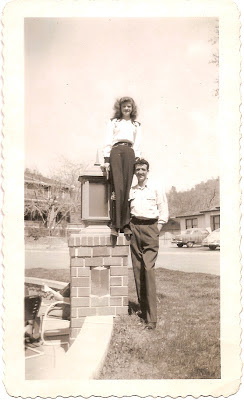 As I open the mystery box of unidentified faces in unmarked photos, I sift through them in the hopes of finding someone I recognize.

Incredibly, looking much the same as the subject of yesterday’s post—“The End” of the Bean family line, Greg—there is a photo of a tall, thin man with dark, curly hair.

He is not Greg, though, but Greg’s father. If it weren’t for the generation that separated them, you would have thought they were twins. Take a look back to yesterday’s post and see for yourself.

There are actually two pictures that I can identify for sure—and a third that I wonder about (which I’ll share with you tomorrow). It’s eerie, looking into that face. I feel like I know the man—and yet, I never met him. His life, cut short, was over long before I could have made his acquaintance.

And yet, all my adult life, I’ve carried that feeling as if I knew him. It was all because I knew his son.

As I go through the genealogical record of Earle Raymond Bean, though, it turns out that, not only did I never actually know him, I don’t know much about him, either. Despite all the stories that have been shared with me over the years, I find that I don’t even have the date of his marriage, nor even the place of his birth. Because those dates are relatively recent, online scans of documents to assist me in this search are not available.

I do know that Earle Raymond Bean was born in 1926 in California, most likely in the county where his family had moved—Alameda County, east of San Francisco. He was born to Samuel and Maud Woodworth Bean.

It was Maud—or at least the Woodworth family—that Earle could thank for the unusual spelling of his first name. What his fellow childhood classmates and teachers didn’t realize was that, in his case, Earle was not a misspelled first name, but a family surname carried by several relatives in previous generations.

Earle, however, succumbed to modern convention and dropped the “e,” adding one more check-point to my research, whenever I sense a lack of progress.

Long after he was gone, though, his wife took care to tell me the finer points of that story. She—the former Marilyn Beverly Sowle—was a southern California girl. Technically, though, she was a SoCal transplant, having been born in Wisconsin to David and Olive Brague Sowle, who had decided to head to Los Angeles early in their marriage.

Funny how I can know all this detail about their lives—down to the last “e” in a name—and yet not know some pertinent details for the genealogical record.

While I feel so much like I know this man and his wife—Earle Raymond Bean and his intended, Marilyn Beverly Sowle—there is so much I don’t know about them. 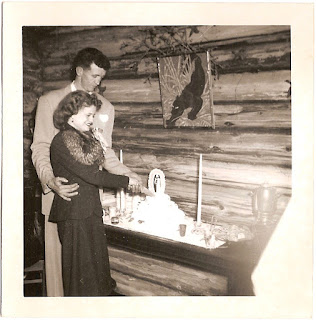 While I can gaze at the detail of the snapshot of their wedding reception and realize that the picture hanging above their cake is the same one that has hung in my sister-in-law’s house to the end of her own life last November, I can’t tell you when that couple cut their wedding cake.

While I can tell you when Earle Bean was born, I can’t even tell you where—though I can provide my guesses as to which town in northern California it might have been.

I can’t even tell you where the photo (top left) was taken—though I can tell you it was in jest over Earle’s height (if I remember correctly, he was six foot six inches tall) relative to Marilyn’s petite frame.

I can tell you Earle served in the United States Marine Corps, as close as you could get in Iwo Jima without being in that famous picture on that eventful day.

But I can’t really tell you much else about him. Except for one thing: when he died. I know it was December 11, 1955, because I’ve seen it on his headstone at the Golden Gate National Cemetery in San Bruno when I went to say goodbye to his wife. After all those years apart, Marilyn could never find another to love, and once again was at his side.
© Copyright 2011 – 2021 by Jacqi Stevens at 2:43:00 AM