As I sift through the photographs left to me by the Bean family, I have to keep in mind that not all the labels I find on the reverse were written at the time the pictures were taken. Case in point: the photos I’m going to share with you today.

I admit: at first glance, I thought these were two pictures of the same person. I also thought that each photograph was taken at the same time. After all, both bear the legend:

The one photo, showing three young girls, has a date handwritten on the reverse: 1900. I’m pretty sure one of these three girls is Leona Bean, so that date would make her about nine years of age. 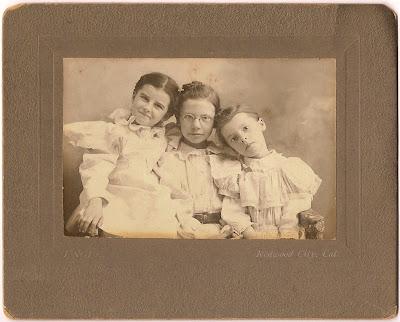 The other photo, bearing the same photographer’s imprint on cardstock slightly varied from the first, seems to also include Leona as one of the subjects. 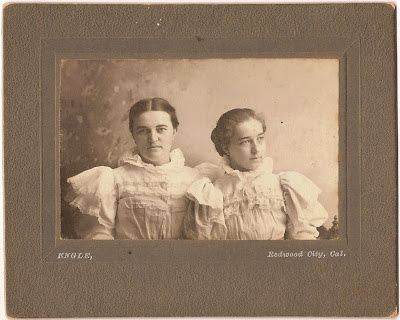 I used to think these were photographs of Leona and her various cousins. I also thought the square-cornered portrait was of an older Leona and possibly one of the very cousins featured in the rounded-corner photograph.

That’s what I thought, that is, until I considered what was written on the reverse of the photo of the “older girls.”

Admittedly, the explanation written on that photograph was most likely added much later—if not all of the note, at least part of it. The handwriting seems to get a bit more shaky, and the ink appears to be of a different color on some of the notes. Besides, there is the obvious slip of the date—indicating 1965 when what was most likely meant was 1865.

Otherwise, if the memory of the inscriber is to be trusted, here’s what we can learn from these two similar photographs from the legend on the reverse: 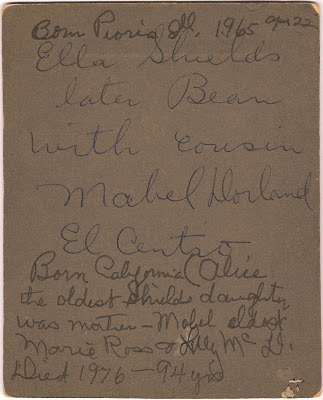 Trying desperately to race some sort of Life’s Clock, someone—I suspect Leona—wanted to pass along, in writing, everything she knew about her family links. Gushing out like an enormous data dump, the names, dates and details all scrambled onto the page in disarray.

I’m quite sure, when I take the time to verify—or disprove—what Leona had to say about her relations in other parts of the state of California, that this scrawl will somehow convert into a treasure map on my hunt for family gems.

In the meantime, as I gaze at the faces in each of these photographs, I’m still not convinced that a picture that looks so much like the young Leona in 1900 could resemble so closely her very own mother.