Sometimes, a box full of unidentified photographs, handed over to the keeper of the family history archives after a relative’s passing, can seem a hopeless task to address. Whose faces are those? Who is left to tell us the names?

I know that feeling all too well, having taken one long look at the jumbled stacks of old pictures from family members one-generation-removed. That was the case for me in receiving the boxes of photos from Leona Bean Grant after her passing in 1977—and then again when her brother William Bean died in 1982.

It’s taken a couple of go-rounds—or maybe more—before I could find any clues to help guide me through the maze of unidentified faces. And, truth be told, I’ve taken quite a few years’ hiatus from the task, as you can see.

Bit by bit, though, I notice patterns, like similar faces from one picture surfacing in another photograph. And, thankfully, there were notes written—some by Leona’s mother, Ella Shields Bean, and some by Leona, herself. 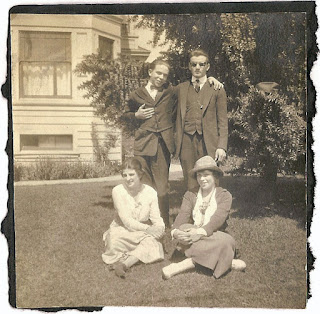 Remember this photograph of a young Leona, sitting next to an unidentified young woman, with her brother Sam and another young friend, in front of their home in Alameda, California?

I found another picture with what looks like the same mystery man. 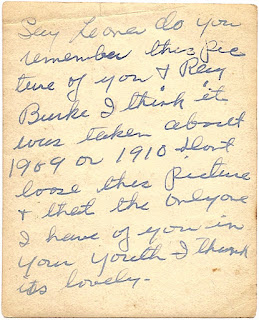 Say Leona do you remember this picture of you + Ray Burke I think it was taken about 1909 or 1910—Don’t loose this picture + that the only one I have of you in your youth—I think it’s lovely. 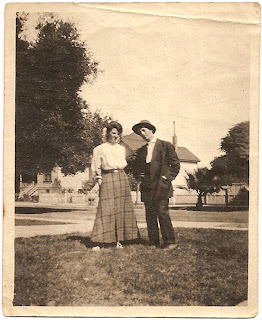 While that only provides a bit of a hint, it gives me a name to keep an eye out for, should any more pictures show up with that face. Though I don’t yet know who Ray Burke is, I can take a glance at the Alameda census records for 1910 and see if there is anyone with that name and age listed near the “Beanery” on Santa Clara Avenue. Or, who knows…maybe Ray Burke will even turn out to be family, himself.
© Copyright 2011 – 2021 by Jacqi Stevens at 2:49:00 AM