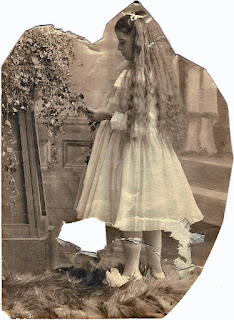 Seeming like a mystery relative, herself, Leona Bean Grant hasn’t left much of a trail for me to follow in pursuit of her family history. Although I cherish the sweet photograph of Leona as a young girl, its torn condition—wrenched from a black-paged scrapbook, I suspect, by the ailing elderly Leona herself, in her near-blind condition years later, to label as “Leona, 7 years”—requires observers to, quite literally, fill in the blanks.

I have precious little else with which to define who Leona was in her younger years. But I do have one other photo—two copies, actually—representing her childhood. Unfortunately, that very picture introduces yet another mystery about this woman.

The photo, taken with a “glaze finish” according to the card to which the print was affixed, was the work of P. F. Adelsback, 1822 Mariposa Street, in Fresno, California. The paper version of the print was labeled “Ethel and Leona.” The card version bore the note, “Leona + Ethel.” Two mothers labeled two pictures, I assume. How did both copies make their way back to Leona?

The card also bore the legend, “long clothes,” which, I thought, was rather redundant. Aggravating, also, was the age, written in ink as either “3” or “5”—the one precisely overwriting the other in such a manner as to disguise which of the two numbers should be correctly heeded.

All that, however, is superseded by one question: Who’s Ethel?

I am presuming that Ethel represents one of Leona’s cousins. I’m not sure why I think so. Redwood City is worlds apart—at least in California topography—from the central valley city of Fresno. However, I do know that Leona’s mother, the former Ella May Shields, had family connections in Fresno—the very street name there of Shields Avenue being named after her own father.

I haven’t yet, however, been able to trace that branch of the family tree. I had, over the months after re-discovering this box of photos in the far corner of my closet, attempted to find any sign of a cousin Ethel. With no luck.

Now armed with several online resources, I thought I’d try my hand at finding Ethel once again. However, one glance at Ancestry.com and I knew I’d not have any quick finds. The complicating factor is that the two girls were born after 1890—which, as you know, became the black hole decade, as far as census records go.

Two additional problems complicate things further. First, none of the Shields family had arrived yet in Fresno county for the preceding census, keeping me from quickly confirming who all the players in this Shields mystery might be. And second, Ella’s father had the rather common given name of William—that’s who the twins got one part of their own names from—and he met a rather tragic end just two years after the 1900 census. At any rate, by then, Ella’s siblings, now also married adults, would more than likely be in their own households for that census and beyond.

I left my pursuit at Ancestry.com—there were other family trees displaying, but one quick glance was enough of a hint that maybe data wasn’t totally complete there—and headed to FamilySearch.org.

I have a trick that I use at that website when I’m uncertain about the full name of the person I’m pursuing: I leave out a lot of the data I already know. In this case, I searched for Ethel with no surname. Instead, I added “Shields” as a surname of one of the parents—I opted to start with a mother’s maiden name as Shields—and searched for death records. I was hoping that one of the Shields cousins—all of whom are now surely gone—would surface with information on a parent’s surname.

Well, my guess of a maternal Shields connection turned out wrong. Handily, the FamilySearch mechanism provided some alternatives—and there she was. Young Ethel turned out to be the daughter of Ella’s older brother Adolphus and his wife, Elsie. Ethel B. Shields was born in May, 1891, just two months shy of her cousin Leona’s own birthday, giving both sets of parents the makings of an adorable portrait of the “twin” cousins just a few years later. 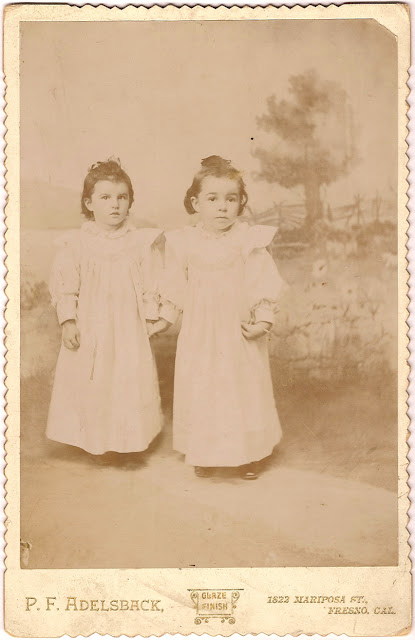