Take a Look at This Picture 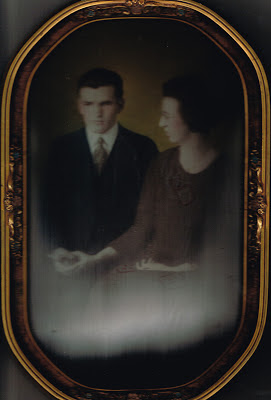 Some people have a knack of looking at a photograph, observing every mundane artifact, and gleaning deep meaning from seemingly inconsequential detail.

I am not one of those people.

There is one portrait, though, of which I’ve been privileged to become the guardian, where I can point out some telltale clues.

That portrait is one of the few pictures I have of Earle Bean’s parents, Samuel and Maud Woodworth Bean of Alameda, California.

I’ve mentioned before that Earle and his older brother Sam were born to this couple in the 1920s—I’ve shown you one (admittedly faded) photograph of the boys with their parents, their aunt and paternal grandmother on the front step of their home.

What I haven’t told you yet is the back story of this unusual couple.

Taking a look at this portrait of the young couple will help reveal some of the details of the challenges confronting each of them.

What you may notice in the portrait is the endearing gesture of Maud holding hands with her husband. You may also notice—though the copy of the portrait is unsatisfactorily blurred—that Sam is looking off to the side, rather than directing his gaze to the camera.

There is a reason for these details.

You see, Maud is not merely being sentimental in arranging her portrait seating alongside her husband. Nor is she risking censure (for that time period) by overly expressing fondness in public.

Maud is most likely “talking” with Sam, much the same as Anne Sullivan used to communicate with her student, Helen Keller.

Sam Bean is both blind and deaf.

Maud, herself, is rather empathetic to this condition. You may note she, herself, dons a thick pair of glasses. Those spectacles may be the only device keeping her from being legally blind, herself.

While I have not researched this for myself, it is my understanding through family oral tradition that Sam met Maud while both were students at the California School for the Deaf and Blind in Berkeley.

Sam was not born with that condition. The story behind the detour in the path of his life is long enough to take a few additional posts here at A Family Tapestry. By the time of this photo, though, he was quite familiar with this new role in life. We’ll go into the reasons why during the next few days.

Recreating this photograph to share here was a challenge in itself. The portrait is well sealed within the frame, and I hesitate to tamper with its construction. Scanning it with a Flip Pal or other such device would be difficult owing to the curved glass covering the front of the frame. Catching a reflection of a flash if a digital camera were used presents similar limiting factors.

On a hunch, and game to experiment, my husband took the frame and set it in his office scanner, which can accommodate prints up to eleven by seventeen inches in size, and gave it a try there. The result, while not flawless, does render a clearer representation of their faces. Perhaps, in that legendary “Round Tuit” day in my future, I can go back and scan the package in reverse order, getting the glare to obliterate the opposite end of the portrait, then take the twin copies and play around with PhotoShop until I am satisfied with the results.

In the meantime, if you would let this little glimpse into the world of Sam and Maud Bean suffice you, I would be most obliged. For, you see, I have little else with which to introduce you into their very different, dark and silent world.
© Copyright 2011 – 2021 by Jacqi Stevens at 2:32:00 AM