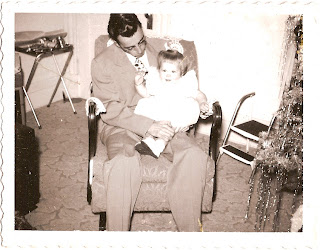 When we come through joyous moments like the Christmas season we’ve just passed, we sometimes forget that times like that are not necessarily as happy for everyone else.

I found a mystery photo in the box handed down to me from the Bean family that—if I’m identifying it correctly—marks the last happy Christmas together for one little girl and her dad.

The baby girl may be Judith Louise Bean, second-born child of Earle and Marilyn Bean. Arriving in October, 1954, she would have been just over the two month mark in time for her first Christmas that year.

I’m not really sure about that identity, however. The baby looks a little too hefty for a two-month-old (give or take the extra ten days past that mark for her age). And her hair color seems a little too light.

The photograph is definitely from the holiday season, though—you can see just the slightest hint of the Christmas tree to the bottom right of the shot, where the old-fashioned tinsel cascades down from a few of the branches.

The man seated in the chair is not cooperating in this identity-fixing quest, either. Looking down at the baby, his face is partially obscured. Hair color, hairline, and glasses are the only possibilities for confirming this subject as Earle Raymond Bean, Judy’s father. Well…and the characteristic long, bony appearance of legs, arms and even hands. Plus that pronounced nose bridge. That, however, could be the Marfan Syndrome speaking louder than the Bean family resemblance.

Though the picture doesn’t include any date—nor any other marks of identification—my speculations would lead me to assume this photo was taken for Christmas in 1954.

The Bean family household, now residing in San Lorenzo, California, would otherwise have been preparing for another Christmas season by now, except for some news the extended family had just received. Earle’s brother, Sam, had been given some devastating medical news which, unfortunately, left him without any treatment options. Soon after, Sam passed away that December second.

The news for Sam was that the Marfan syndrome he had was about to cause some serious problems to his cardiovascular system.

Hearing that news could only mean the same thing for his younger brother, Earle, who had the same condition. While the brothers were nearly five years apart in age, the news took only days to catch up with Earle, who followed suit on December eleventh—nine days later.

That news left Marilyn bereft of both her husband and her brother-in-law—and left alone to care for two small children, one of whom was barely over a year in age. Within a short period of time, she made the decision to move from the family home in the San Francisco Bay Area to a new place farther north, in Santa Rosa, California, where her mother now lived. At least she could be near her mother and step father—she had lost her own father only the past spring—and have some assistance in raising her two children. 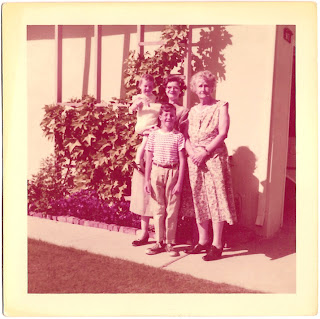 The new town proved to be a wise choice for this family—not only a beautiful place to live, but one near extended family. The house she purchased was just down the street from her mother’s place—within walking distance for when the grandchildren were older and more independent.

Perhaps one picture I found in my box—a faded photograph of Marilyn, Greg, Judy and an unidentified older woman who may have been Marilyn's mom—was an example of an opportunity for them to get together as the children grew.

The house, itself, became a symbol of a life where the children could grow in a peaceful neighborhood—just down the street from school as well as a beautiful park. It became a place the kids could call their own in this brave new life, where they could confidently create their own decorations as they looked forward to new Christmases and life together, just the three of them. 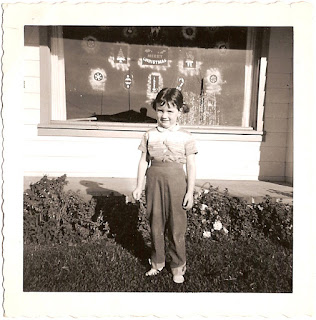