Can You Know a Man By the Cars He Keeps?

What can you find out about a person through the hundreds of unidentified photographs he has left behind? Not much, I used to think. However, now that I’ve reconsidered those many photos in the case of Bill Bean of Alameda, California, I’m beginning to connect those dots. Unbelievably, a picture is emerging. The big picture, that is.

The process does take time. It sometimes takes lots of breaks, so I can come back to the task with fresh eyes. I’ve left this stash alone for years—forgotten about it, actually—and yet, when the same-old-same-old wore off my eyes, the pictures started telling me a fresh story.

In Bill’s case, cars figured prominently in his life’s story. The very fact that he left so many unmarked snapshots of automobiles behind—visible memories he held onto all those years—was a monument to what was important in his life. This fascination with cars wasn’t just a business for him—it was a way of life. 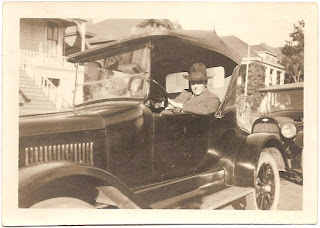 Of the many pictures in his collection, one thankfully retained a date. Though faded, a date stamp still shows on the reverse of this first photo: August 29, 1920. My best guess is that this is actually Bill Bean in the photo, in the driver’s seat, parked curbside along a residential street looking much like the one in Alameda he called home.

I have no idea whether he was just showing off a new acquisition, or—who knows? I don’t even know enough to tell what make of vehicle it was that he was driving. But I did notice that the car parked behind him bore an insignia resembling that of the product of one of his competitors: Chevrolet. 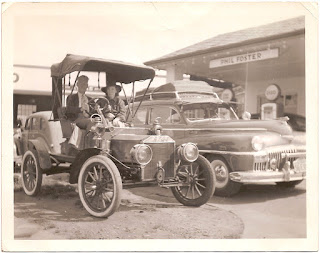 I wish I had a date or other identifying mark for this next photo. Clearly, we’ve moved on from the 1920s into modern times. Parked next to a larger car, looking like it’s packed for an excursion, is a model from earlier days. I don’t know if the couple just hopped in to snap the picture for memories’ sake, or whether they were still actually driving that thing. There's really not that much I can tell about them, for unfortunately, I have no label to guide me in identifying the twosome.

Wherever it was parked, it was by the Phil Foster Esso station. I just wish I had an idea whether this was a stop on a trip from Redwood City to Fresno to visit Bill's mother's Shields relatives, or to Mendocino, or to another town where family lived. 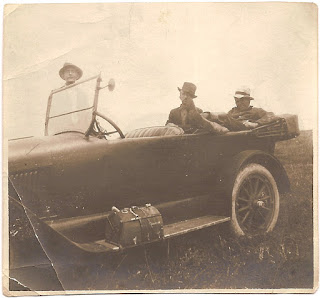 Yes, cars told the stories of Bill’s life. It’s an incomplete story—so far, at least—for I have no idea who the people are sitting in those many contraptions, where they were going, and what events filled their lives.

If nothing else, though, I can tell that cars figured prominently in Bill Bean’s life—and that some of those times were spent doing the very thing cars were meant to do: get people to the places where they wanted to be.
© Copyright 2011 – 2021 by Jacqi Stevens at 2:50:00 AM

Email ThisBlogThis!Share to TwitterShare to FacebookShare to Pinterest
Labels: Bean, California, Cars, Getting the Big Picture, On the Move, Shields