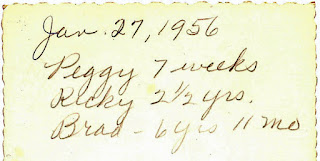 Brad, Ricky and Peggy: where are you?

Do you know that I have a photo of your family from this exact date in 1956, complete with a note on the back of the snapshot—probably written by your mom—listing your ages at the time?

Peggy, you were still a babe in arms, propped up on your mother’s lap for this photo. Your oldest brother Brad—nearly seven at the time—sat casually on your dad’s lap, while brother Ricky sat on the arm of the sofa, looking nonchalantly in the other direction while the camera snapped the picture.

I have no idea whose living room provided the backdrop for this informal portrait, but my guess involves someone from the Bean family. Since this photo was passed along to me via either Bill Bean of Alameda, California, or his sister Leona Bean Grant—I can’t tell which, now that the whole collection is in one jumbled pile—I almost wonder if you are family, in one way or another.

Or perhaps you are family-of-family, that tortuous web of relationships to which my own family preferred to assign the short-hand tag of “outlaws.” Could you be related to Bill’s wife Ellen—a woman I know little about, other than her first name? I can recognize Ellen in some of the pictures Bill passed along, but I hardly know anything else about her. But neither of your parents look much like Ellen, so maybe you are related to someone else.

It doesn’t help that I know even less about Leona’s husband’s family. I only discovered a picture of him the other day. And his first name—or is that his nickname?—but no sign of him in any records or documents. With such a scant bit of information on him, how could I even begin to know if you are related to Bob Grant?

Perhaps you are just friends. Or, to be more correct about this relationship, maybe it was your parents who knew Bill and Ellen Bean, or Bob and Leona Grant. Could your parents have been neighbors? Or business associates?

I’ll never know—that is, I’ll never know unless the Internet once again works its magic through the devices of those many search engines out there. Hopefully, at some point, one of you, or your children, or maybe even your grandchildren, will sit down at a computer and wonder what would come up by just entering those names. Brad. Ricky. Peggy.

Maybe then, the same names I’m now wondering about will become real people, reaching out to connect and fill in the rest of the story. 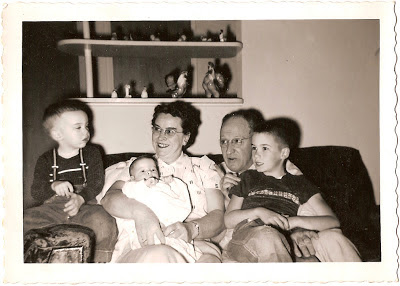