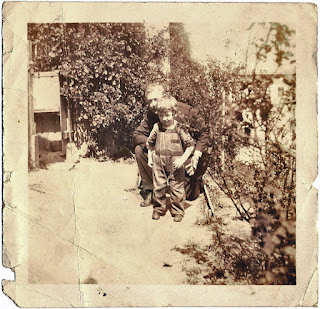 As much as I don’t know about Leona Bean Grant’s husband, I think an idea starts taking shape in my mind as I begin to find other photographs of the man. All it took was that one key, identifying the face and linking it to a name, and now I’m equipped to start putting the photographic puzzle pieces together.

A secondary theme also begins to emerge in this family puzzle: the family’s love affair with that newfangled contraption, the automobile. I’d be tempted to say it’s the men’s domain, but Leona has her fair share of photographs next to some impressive vehicles through the years, too. Perhaps, thinking of my own sister-in-law, Leona’s grand-niece, this trait is genetic… 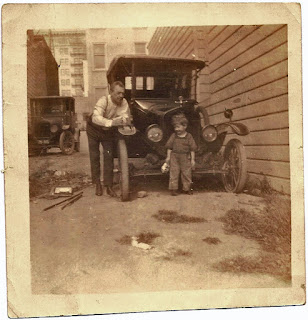 This fascination with cars spanned the generations, too, judging by a couple old photographs I found of the once-unknown Bob and a young companion. Both photos are labeled, “Bob and Sammie” and bear the date, 1923. Each of them also spells out the address where the Grants lived at that time: 48 Joice Terrace. No city is included, but I assume it was Alameda, California, where Leona’s brothers and mother also lived. One photo includes the note, “nr Fairmont Hotel.” Another photo states, “Amos + Andy Ford 1919.” (Whether that designates a particular version or car model, or the name of a specific shop, I don’t know.)

The “Sammie” referred to in each of the photos—at least I’m assuming as much—is Leona’s brother Sam’s oldest boy. Sammie junior was born in 1921, which fits right in with the appearance of the little tyke in the pictures. Looks like he and his uncle make great companions, whether at work or at play.