Lifestyles and Their Cars

The ad people may just have gotten it right, after all: when it comes to cars, each model comes with its own ambience. Each one creates its own style.

For Bill Bean, that freedom that his wheels brought included not only a business life, but a private life. Cars got him where he wanted to go—whether that was to greater success, or to a greater fishing spot.

Now that the automobile has been on the scene for so many decades, I wonder what we can infer from our ancestors’ choice of vehicles. After all, once we got past the proverbial age of Ford—you can have your car in any color you want, just so long as it is black—there were so many choices. What did that say about the chooser in our family in each of the generations behind us? 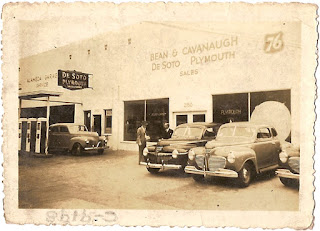 From the Bean & Cavanaugh dealership in Alameda, California, there was plenty to choose from, for those who wanted style and had the pocketbook to support that taste in cars.

As for Bill’s own preferences, I can tell from the many photos in his collection that he liked his cars taking him wherever he wished to go—whether for business or pleasure. 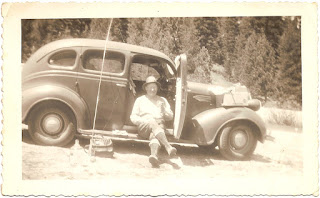 I have no idea who the man is, enjoying the set-up this automobile afforded him, but I wouldn’t be surprised if he were a fishing buddy of Bill’s. No doubt, it was Bill taking the picture, himself. The only thing I know for sure about this photo is that it was developed on August 30, 1941, for that is what the date stamp reveals on the reverse. 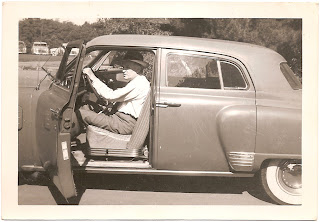 I don’t know much about this other photo, either—except that I’m pretty sure it was Bill in the driver’s seat. Who knows what the story behind this vignette was. My guess—seeing the passenger door left open, too—is that Bill turned to his passenger and said, “Why don’t you hop out and take my picture?”

Again, no date—as was the case in so many of the photographs in this collection. Maddening that the guess work was left to others—but then, Bill probably had no idea anyone would be sifting through his stash of photographic memories, wondering about the back stories, after he was gone. 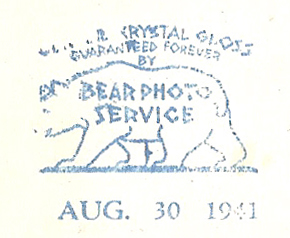