Another Clue Adds Another Dot

On a torn photograph destined for the trash bin, I found an inked-in mark that hardly even resembled the arrow it was intended to be. Most likely, in her later years, Leona Bean Grant was trying to leave explanations of the highlights of her life, using old photographs as prompts to scrawl notes on the reverse in her open, shaky hand.

Perhaps it was her failing eyesight that shaped the handwriting. The arrow added to the picture barely even looked like an arrow. Some of the ink had smeared on the face of the photo. And the photo itself seemed so non-descript.

This time, though, I was looking at it with fresh eyes. I had just yesterday posted a group snapshot of an event, in which I had paid close attention to the faces. The event seemed like a party, with everyone having a grand time. So grand, in fact, that I was having trouble determining the identity of the faces. One woman, though, had stood out, having been featured in another photo I posted alongside this one—according to the legend on the reverse, named either Hazel or Nibs. Let’s say she’s Hazel.

Though the picture I’m looking at today, with its smeared ink and shaky arrow, seems so poorly framed as to nearly leave out the subjects of the photo—almost cut out of the bottom of the picture entirely—this time, I spot something that is now familiar: Hazel’s face.

Yes, this crazy picture, looking more like the misfiring of the camera than a thoughtfully-composed photograph, belongs with the one from yesterday’s post.

Which is a good thing to know, for on the reverse, it contains an explanation: 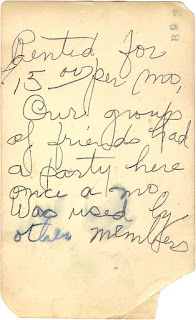 Rented for $15.00 per mo. Our group of friends had a party here once a mo. Was used by other members.

Since I have been able to tell, thanks to city directories posted online at Ancestry.com, that Leona lived in San Francisco during the 1920s, it is very possible that this party rental was situated in the hills in San Francisco, itself. While it might not be evident in this scanned copy of the photo, in the original, I can see some of the contour of the land and the types of greenery one would expect to see toward the west side of the city.

While the photography was abysmal, and the legend scant and barely legible, once paired with the other, better-composed, snapshot, provides a fuller explanation. Whether Leona was a party girl in her San Francisco years, or just a socially-inclined young urban professional, she certainly ran with a large group of friends.

What a different sense this leaves of a personality that I recall only as an eccentric old lady. 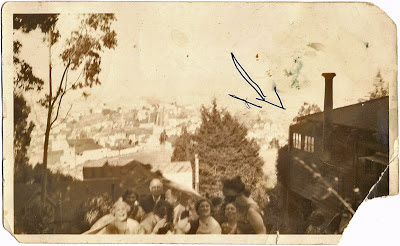 © Copyright 2011 – 2022 by Jacqi Stevens at 2:41:00 AM
Email ThisBlogThis!Share to TwitterShare to FacebookShare to Pinterest
Labels: Bean, California, Grant, Unidentified Faces