Frankly, I have to say Leona keeps me guessing. I can’t ever be sure whether to search for “Leona Bean” or “Leona Grant” in the various databases designed to help us piece together our family history. She’s led me on a merry chase, home in Alameda, California, with mom—that’s Ella Shields Bean—as a single student in 1916, then home again with mom by 1934 as a “Mrs.” Somewhere in between (mostly in the 1920s), she shows up in city directories in San Francisco, listed by the surname Grant, but with no husband in sight, and with her own occupation listed as “trained nurse.”

Whatever Leona was, whether married or not, she was an independent woman.

Perhaps the marked absence of any photos of Mr. Grant—whoever he might have been—is telling in its own right. 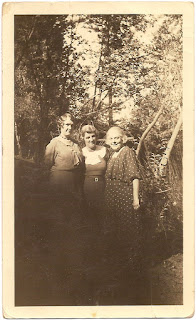 In his place, though, are a few photographs of Leona with friends. In one sedate pose with two other women, the vignette is captured in what appears to be a forest-like setting, and yet, each of the women seems dressed for an occasion that doesn’t quite fit the surroundings.

Whichever of the three was pictured on the right, she has a memorable face that shows up in a delightful group photograph, possibly taken at that same woodland retreat. Does that mean that she is Hazel? That name shows up in both photos, but would mean the first snapshot was not labeled in the traditional left-to-right format. And who is Nibs? What would Nibs be the nickname for? 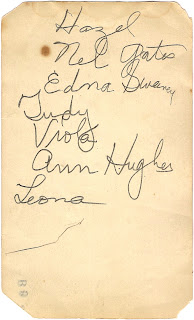 When I see that picture, I wonder if it had been taken during a break in a work convention of some sort. The names on the back of this photo are not of Bean family surnames, making me wonder if they are coworkers. Unfortunately, again, there seems to be no order in the labeling of the photo. Actually, several faces go nameless—but which ones? Perhaps the ones with only first names listed are either really good friends, sure to never be forgotten like Hazel, or people who have just been met at the event, for whom full names were not obtained at such short notice.

Whoever they were, Leona wanted to remember: Hazel, Nel Gates, Edna Swaney (or Sweeney?), Judy, Viola, and Ann Hughes.

Listing her own name last does not guarantee that Leona is the last in the lineup, however.

Come to think of it, I can’t even find Leona’s face anywhere. Is she the photographer this time? Or just laughing so hard, she doesn’t even look like her familiar self?

Whoever they all are, they each are having just the most wonderful time. 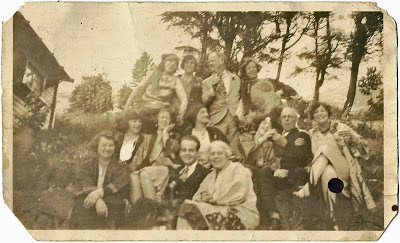