“Over the Great Divide”

Typical for wording in newspaper articles dating from the 1920s, but unusual to ears unaccustomed to hearing such descriptions in our times, William C. Woodworth’s obituary seems lengthy and ornate.

However, one such flowery statement in the article caught my eye for another reason. Apparently, not only had Maud Woodworth Bean lost her father on May 22, 1928. She had also, within that past year, lost both an uncle and an aunt.

W. C. Woodworth, a pioneer of the Azusa valley, died at his residence on Vincent street on Tuesday. He is the third member of his family to pass over the great divide in the past year, L. D. Woodworth, a brother, having answered the call last November, and a sister, Mrs. A. L. Patterson, dying in Sioux City, Iowa, four weeks ago.

Travel challenges being what they were in the 1920s, it is doubtful that Maud and Sam Bean would have traveled to Iowa for the funeral of Maud’s aunt—whichever of William’s sisters that might have been, the frustrating custom of publicly referring to a married woman only by her husband’s name (or worse, by his initials) preventing discovery of further details so far. With Maud’s grandmother, Eliza, being the mother of eight—seven of whom were still living by the time of the 1900 census—that aunt could have been one of at least three sisters.

On the other hand, if Maud had returned alone from Texas only a couple years earlier, perhaps it wouldn’t be a stretch to imagine her returning back east for an aunt’s funeral.

Maud’s uncle, however, may have been another case. Named most likely for his grandfather, Lafayette D. Woodworth, the man had evidently made the move to southern California along with his brother William and their parents. Yet, even then, a trip from Maud’s residence in Alameda—that is, if she were actually there at the time—would have entailed a long day’s journey.

The obituary, flowery as it was, also included the kind of basic facts that genealogists have always prized in their research quest. Assuming that the newspaper hadn’t gotten any of the details wrong, William left three siblings behind:

Of course, those stylish initials get in the way of straightforward research progress. I have a solid guess, though, that “H. D.” probably refers to William’s brother Harvey. Social protocol of the times hints that Emma Larabee was, by that time, already widowed, herself. Mrs. F. C. Hoskins, unfortunately, will have to be put on my “guess” list along with Mrs. A. L. Patterson until I find further hints—and no, I don’t just mean the “shaky leaf” type.

With such a large family of origin, I wonder how many were there to mourn William Woodworth’s passing. With a litany of deaths to regale us as we look back on the timeline of passings in Maud’s adult life up to this point, loss seemed to be a way of life. Babies, young people, the elderly—almost anyone, at any time, could have qualified for a trip “over the great divide.” 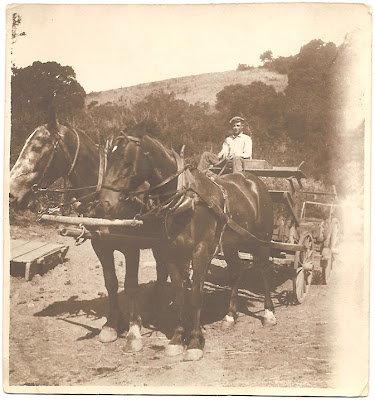 An unidentified man rides atop a cart, handling a team of farm horses in a scene not unlike that which might have been played out during William C. Woodworth's early years in southern California. Unmarked, undated photograph from the collection of Bill Bean.

© Copyright 2011 – 2022 by Jacqi Stevens at 2:44:00 AM
Email ThisBlogThis!Share to TwitterShare to FacebookShare to Pinterest
Labels: Bean, California, Newspaper Clippings, On the Move, Woodworth