Another Season of Sadnesses

The year of 1928 brought more difficult news for Samuel Bean’s young family. With Maud Woodworth Bean having recently lost one of her twin sons in 1927, following the earlier loss of her own sister Helen, it seems the decade of the ’20s was slated to be a sad one for her.

By 1928, Maud’s father—the blind man she reminisced about having walked with in their orange groves in southern California—was nearing sixty two years of age. A Wisconsin native immigrating first to Sioux City, Iowa, and from there to California, William C. Woodworth was considered a pioneer of the Azusa Valley. He had moved to the Los Angeles area—admittedly a more rural setting in those days—with his parents, Lafayette and Eliza Woodworth. The family had arrived from Sioux City in 1886, settling in Covina.

By the time Maud’s father was twenty four, he had returned to Sioux City to claim his bride, the former Effie Aurilla Williams—marrying, as it turned out, on her birthday in 1890. The newlyweds returned to the Woodworth family farm in California, where they raised six children—though, by this point in 1928, only three of those six were still living. The couple had remained in Covina ever since.

Maud’s father was not always blind, but the disability’s onset had struck him when he was well into his adulthood. Despite that difficulty, William Woodworth was able to attend to the business of running his large ranch.

Yet as the year of 1928 got underway, it became apparent that Sam and Maud were about to suffer another loss: William C. Woodworth passed away at his home on May 22, five months shy of his sixty second birthday. His obituary listed his daughter Maud’s residence as Alameda, California—no surprises as to her location this time—but there is no indication whether she was able to travel south to be present at his funeral.

As if added as a melancholy postscript, that same year ended with the somber note of Sam’s own father’s passing. Leon Bean, the divorced husband of the persistent Ella Shields Bean, added his own passing to the family’s season of sadness with his death on November 12, 1928—a year the likes of which Sam and Maud surely hoped would soon be past. 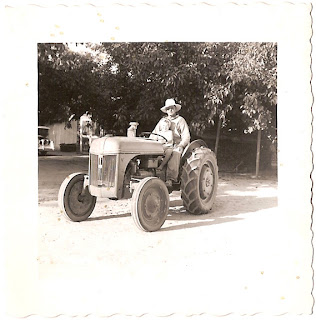 Photograph, above, from the collection of Bill Bean. Unidentified man and child on tractor. This unmarked photo most likely post-dates Maud Woodworth Bean's father, William Woodworth, and possibly is from an entirely different branch of the extended family.
© Copyright 2011 – 2022 by Jacqi Stevens at 2:47:00 AM
Email ThisBlogThis!Share to TwitterShare to FacebookShare to Pinterest
Labels: Bean, California, Medical Issues, Shields, Woodworth