Hanging Around in Hangtown

As we’ve traced the family line of Sam Bean’s wife, Maud Woodworth, we’ve worked our way to her grandfather, Lafayette Woodworth. He was the immigrant to California, born in Vermont, but settled originally in Wisconsin. Finding a narrative sketch of his life in a 1901 history volume opens up the story on his life in a way gleaning census records can’t equal.

While the introduction to his brief biographical sketch, as we found out yesterday, doesn’t seem to indicate anything out of the ordinary for farm boys of that era, what follows in his early adulthood was the stuff of young men’s dreams. 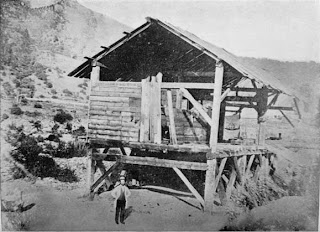 Quite a lot of living was packed into the next paragraph in that book—I’ll share it with you below—but even with all the details, it leads to a lot of further questions.

Take the dates of his departure from Wisconsin, for instance: if the lure of the gold rush was what impelled him to head west, why 1852? Why not 1849?

On top of that, such a journey might be the kind of trip a single young man might envision—not a married man with two young daughters and a son who had either just been born or was set to arrive at any minute. I wonder what his wife thought about that!

Granted, if everything remained just the same as it was for the 1850 census, Lafayette’s wife and children lived in the same household as his parents—Jabez and Mahitabel Woodworth—his younger, single brother, Daniel Shaw Woodworth, and his married sister Delilah and her husband Edward Burell Fay. If it “takes a village” to raise a child, Lafayette at least had a good start with all the helping hands in his extended family.

That set up, however, only gave him a brief window of time to pack in a lot of adventure. His brother Daniel was soon to be married—after moving off to a distant Wisconsin county (where, thankfully, another such tome of local history would pick up his own biographical details). His parents would join Daniel in that move in July, 1854.

Not to mention, the indication of Lafayette's arrival back in Wisconsin was implied through the birth of the Woodworths’ next son, Sumner, in 1855.

To accomplish all that was listed in that biographical sketch—traveling from Wisconsin to “Hangtown” in northern California, then to Oakland, then back northeast to Coloma in El Dorado County, then back to the coast, sailing south to Nicaragua, crossing the isthmus, then up to New York and then back home to Wisconsin—in three short years during that era of slower modes of travel is indeed considerable.

When about twenty-two years of age Mr. Woodworth started out in the world for himself. Believing he could accomplish more in the middle states than in the east, he settled in Kenosha county, Wis., where for some years he engaged in general farming and stock-raising. Not content, however, with the prospects of a permanent residence in Wisconsin, in 1852 he set out, in a wagon, across the plains, with California as his destination. For a time he tried his luck at mining in the neighborhood of Hangtown. He was also employed in Oakland as head-sawyer in the redwood mill owned by James Henry Howe. During his gold-mining experience he was for a short time employed in the old world-famed Sutter mill, where California gold was first discovered. Returning, via Nicaragua and New York to Wisconsin, he resumed farming, in which he continued for many years, meeting with success. However, his old love for the Pacific coast continued and in 1887 he returned to California and took up his permanent residence on his present ranch, two and one-half miles west of Covina.


Photograph: Sutter's Mill, Coloma, California. Carpenter James W. Marshall, who discovered gold on the property, stands in the foreground. Reproduction of the original daguerreotype taken by R. H. Vance in 1850. Courtesy Wikipedia; in the public domain.
© Copyright 2011 – 2022 by Jacqi Stevens at 2:49:00 AM
Email ThisBlogThis!Share to TwitterShare to FacebookShare to Pinterest
Labels: California, On the Move, Wisconsin, Woodworth